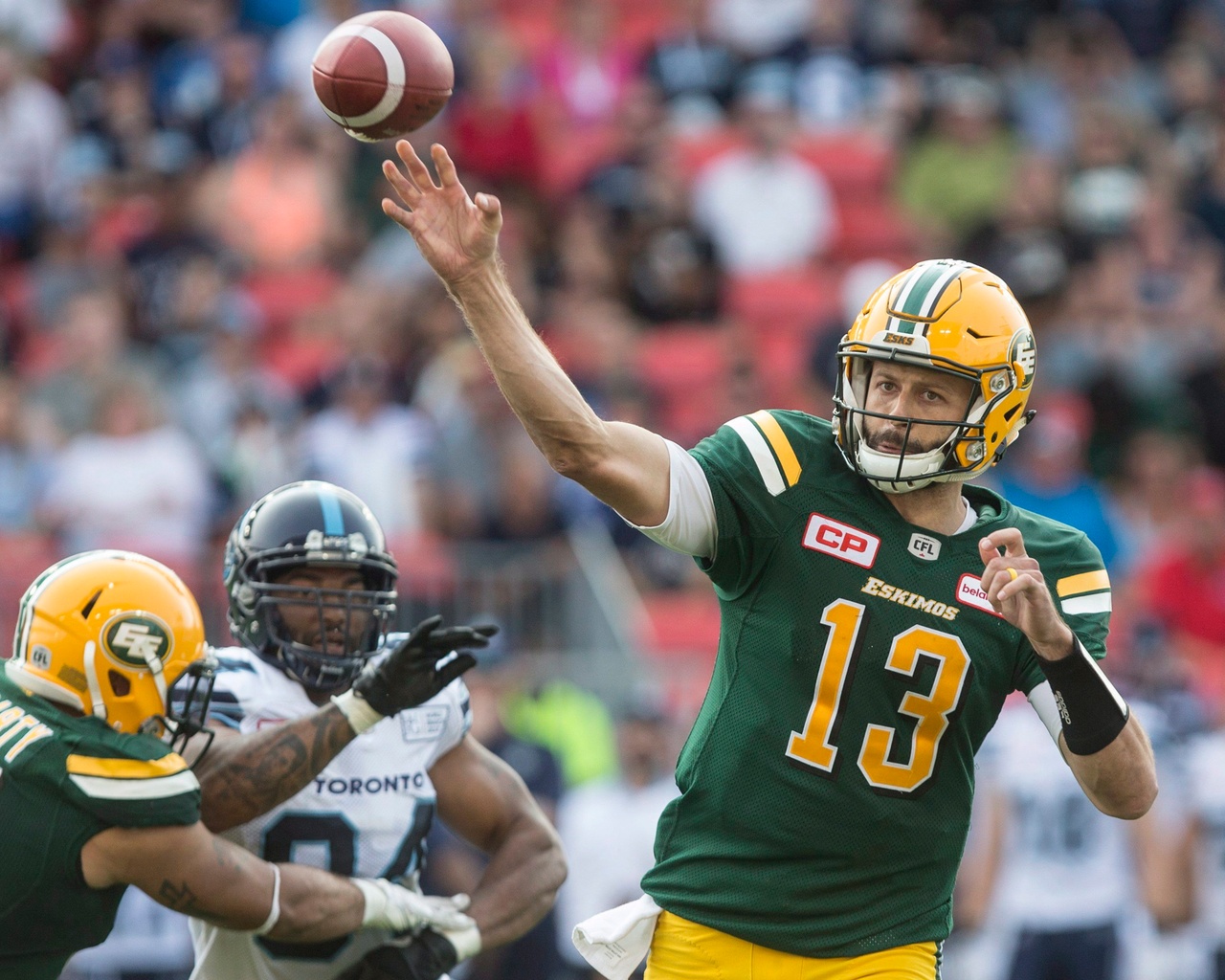 The Eskimos season keeps getting Wilder and Wilder.

After starting out with seven straight wins despite an incredible run of injuries, the Esks have now lost five consecutive games for the first time since 2013.

Rookie running back James Wilder Jr. broke a 14-14 tie with a 76-yard touchdown run late in the second quarter to give the Toronto Argonauts a lead they would never surrender Saturday afternoon en route to a 34-26 victory over the Eskimos at BMO Field in Toronto.

It was the longest rushing TD in the CFL this year.

Overall, Wilder rushed for 190 yards on 11 carries – eclipsing his previous total of 172 yards over 11 games – and added another 67 yards on seven catches for 257 all-purpose yards as the Argos recorded only the fourth win by an East Division team over a West Division opponent in 26 inter-divisional games this season.

“Right now, it’s definitely a deflating loss,” Eskimos defensive tackle Euclid Cummings said on the 630 CHED post-game show. “He had a good game running. Basically, we were a little undersized in there, but that’s no excuse.”

The Esks, who played with four defensive ends and only two tackles (Cummings and Almondo Sewell), limited Toronto quarterback Ricky Ray to only 224 passing yards, but Wilder’s big plays, and a 125-yard missed field goal return for a touchdown by Martese Jackson, allowed the Argos to take a commanding 31-15 lead by the midway mark of the third quarter.

Once again, the Eskimos rallied, but couldn’t close the deal.

“There are spurts throughout these last couple of games where we’re playing really good football, and then there are spurts where we’re not,” said Eskimos QB Mike Reilly, who completed 23 of 36 passes for 323 yards and two TDs. “We’re kind of stuck in neutral.

“We’ve just got to figure out how to play that great football we’re capable of and do it more consistently.”

Reilly pointed out that the Eskimos had opportunities throughout the game on offense, defense, and special teams.

“We just have to do a better job of executing when the opportunities present themselves and doing it for four quarters,” he said.

With a bye week coming up, the Esks won’t play again until the 8-3 Winnipeg Blue Bombers visit The Brick Field at Commonwealth Stadium on Saturday, Sept. 30 in their Armed Forces Appreciation Night, presented by EPCOR.

“I don’t like bye weeks,” Reilly said. “I don’t like them after a win. I like them even less after a loss. I just want to get back out on the football field.

“But it has been a stretch for us. It’ll be good to be able to recharge the batteries a little bit. And when you get away from it for a little bit, you get hungrier to come back and play. I hope our guys take that time to be around family and recharge a little bit but come back excited and ready to get to work and ready to fix what is wrong right now.”

Despite the five losses in a row that leave the third-place Eskimos just one win ahead of the Saskatchewan Roughriders (6-5) and B.C. Lions (6-6) in the West Division, Reilly said the season is far from over.

“We just haven’t done good enough for the last five games,” he said. “We haven’t got the job done. We’re obviously capable of doing that. We showed that for seven weeks and again we’ve shown it for spurts over the last couple of games.

“But as the season progresses – we just finished the middle portion of our season – and you get into the last third of the year, you can’t be making the mistakes that are costing you points. You’ve got to capitalize on the other team’s errors and things like that. The level of error you can get away with later in the year starts to become smaller and smaller.

“You want to be playing your best football in that last third of the season, and we have the opportunity to do that,” Reilly continued. “If we do that, we’ll be excited

about where we’re at when the whole thing is finished, but if we don’t, it’s going to be a tough battle.

“We’ve got to come back,  and we’ve got to get on a bit of a hot streak in this last third – and I’m not talking about wins and losses. I’m just talking about playing good football in all three phases for all four quarters. That’s really the goal.”

Edmonton’s offence controlled the ball for 11 minutes and 16 seconds in the third quarter, but had only one point to show for its efforts as Hugh O’Neill, who took over the place-kicking duties again after recent recruit Chris Milo kicked field goals and converts for the last two games, missed back-to-back field goals from 28 and 42 yards. Instead of trimming the Toronto lead to 24-20, the Eskimos fell 16 points back.

The Argos went up 34-15 after a Wilder-powered drive enabled Toronto’s Lirim Hajrullahu to kick his second field goal early in the fourth quarter, but the Eskimos responded with a 75-yard scoring drive over six plays, capped by running back Travon Van’s second TD of the game on an eight-yard pass-and-run play.

Reilly threw the ball to Derel Walker for a two-point convert to make the score 34-23,  and the Esks were soon threatening to score again when linebacker Adam Konar made his second interception in as many games a couple of plays later.

The Eskimos were down to the Toronto four-yard line, but Duke Williams’ touchdown catch in the end zone was wiped out when officials ruled offensive pass interference after the Argos challenged the play. O’Neill kicked a 21-yard field goal to bring the Green and Gold within eight points.

A 60-yard pass-and-run play with receiver Bryant Mitchell had the Eskimos threatening again at the Toronto 13 with 2:03 to play, but a three-yard run, an incomplete pass to Williams (head coach Jason Maas unsuccessfully challenged the play that it should have been defensive pass interference) and Reilly getting sacked on third down – taking another helmet hit to the head for the second week in a row without a penalty – ended Edmonton’s hopes of completing the comeback.

The Eskimos opened the scoring only 106 seconds into the game after scoring only three points in the first quarter of their previous four losses. Van had a 12-yard touchdown run on his first carry since coming off the six-game injured list, taking advantage of a turnover when Cummings forced a fumble with a hit on Ray and Sewell recovered the loose ball at the Toronto 25.

Linebacker Kenny Ladler dropped a possible interception early on a Toronto series that ended with the Argos’ first touchdown by S.J. Green just over 10 minutes later.

After the Argos went ahead 14-7 early in the second quarter, the Eskimos replied right away with a 46-yard bomb to Brandon Zylstra to tie the score, but the offense sputtered on its last three possessions of the first half.

A quarterback sack by Sewell and Van’s 36-yard punt return gave Edmonton the ball at the Toronto 35 midway through the third quarter. Unfortunately, that’s when Jackson took O’Neill’s missed field goal to the house for the winning points.