Elks look to 2023 with sense of optimism, spirit of resolve 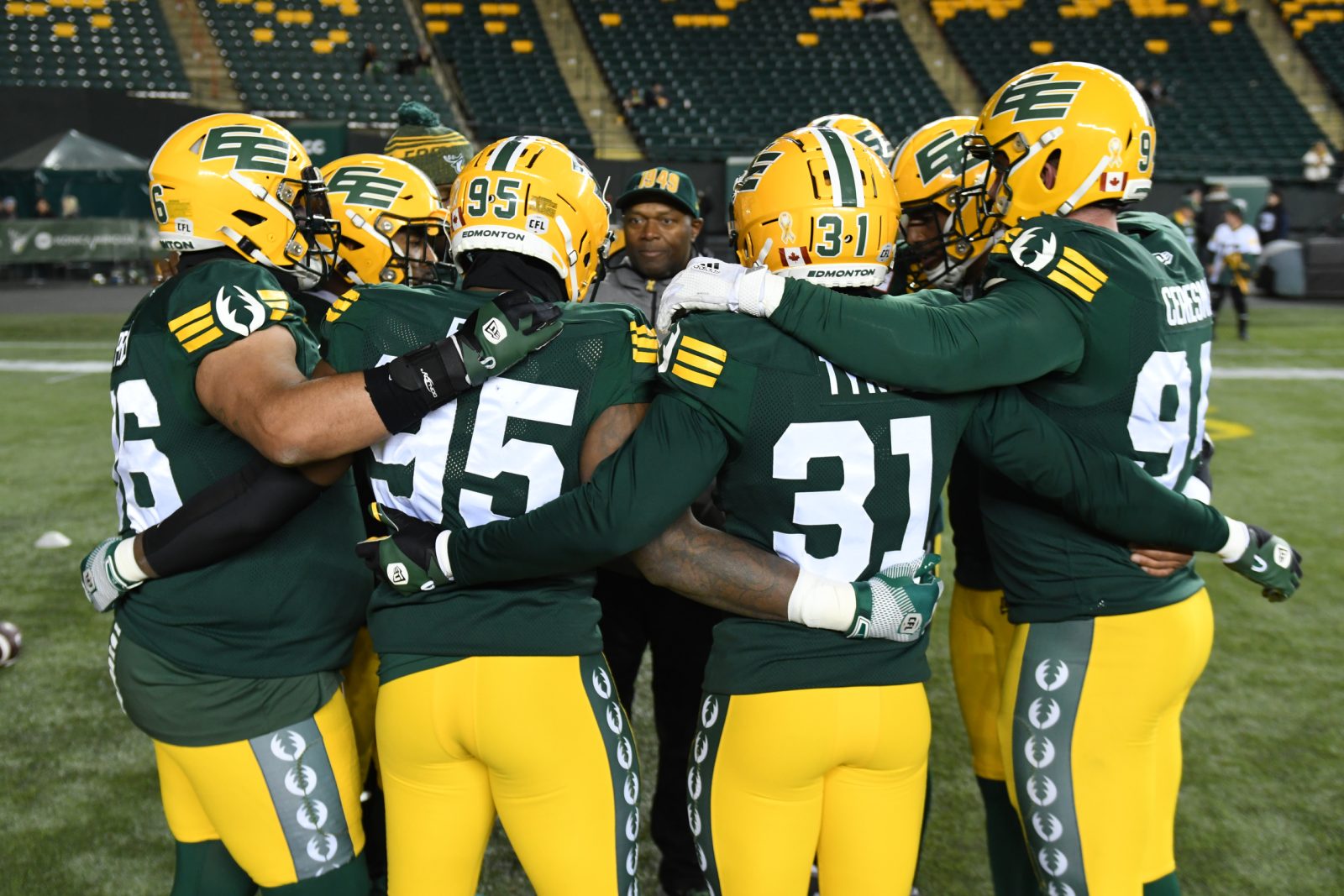 Elks look to 2023 with sense of optimism, spirit of resolve

There was a spirit of optimism and sense of resolve in the air at Commonwealth Stadium on Saturday as the Edmonton Elks gathered for one final time in 2022 on what is colloquially known as ‘Garbage Bay Day’.

It was only around 12 hours earlier that Edmonton were defeated 31-14 by the B.C. Lions to finish the regular season with a 4-14 record, last place in the CFL West Division.

Between packing up lockers, doing exit interviews and saying their goodbyes, the herd expressed a shared belief that the 2023 version of the Green and Gold will be much improved, while also detailing their off-season plans that will be key to ensuring next year’s success.

“I feel like we’ve put in place some great things to build from next year to go forward,” said veteran Derel Walker, Edmonton’s leading pass-catcher of 2022 with 65 receptions. “I feel like we’re establishing a great foundation to move into the future.”

Two of those foundational pieces are running back Kevin Brown and wideout Dillon Mitchell, who both joined the Elks as free-agent signees during the season, and each provided the Elks with a new offensive dynamic.

In less than half a season, Mitchell had 35 catches for 637 yards, both third on the team. The former NFL draft pick also scored four touchdowns and went six straight games with a reception of at least 40 yards.

Brown, meanwhile, racked up 486 rushing yards and 176 receiving yards in just seven games. The five-foot-nine force was the only Elks player with a 100-yard rushing game in 2022, doing so twice.

”Those two guys came in and they flashed on the scene,” Walker said. “Kevin is a little wrecking ball running down the field, and Dillon made big lays down the field every game, doing what he had to do, and I’m really excited for those two guys to see what they’re going to do next year.”

In Coach They Trust

A big reason for the upbeat outlook permeating the EE locker room is the leadership of coach and general manager Chris Jones, who wrapped up the first season of his second tenure in Edmonton. In his prior stint as head coach, Jones led a remarkable turnaround that produced a Grey Cup for the Green and Gold in 2015 just two years they had missed the postseason.

“He’s done it before, and I have a lot of confidence that he’s going to turn this ship around,” said defensive lineman Jake Ceresna, who led the Elks this season in sacks and forced fumbles. “it’s just a matter of getting the pieces moving and getting everything the way that he wants it, so I expect us next year to be a much better football team.”

For his part, Jones is already scouring the football landscape, as he begins constructing his lineup for 2023.

“There’s not going to be a stone that’s unturned. We’re going to turn over a lot of rocks, we’re going to work as hard as humanly possible to make sure the squad we put together next year puts us in position to do something a lot different than what we did (in 2022).”

Jones was encouraged by what he saw from many of the young Elks, including Edmonton’s 2022 first round draft picks, defensive back Enock Makonzo (fourth overall) and quarterback Tre Ford (eighth overall).

“We feel good about our draft class last year, we feel good about some of the other rookies that we brought in around the mid-season mark, and we’ve got a staple group of high-character veterans in that room,” Jones said.

“So now we’ve got to have a good free agency, we’ve got to have a great draft, and we’re already hitting the ground running on the U.S. side of things, going to some places to see some people, evaluating with PFF (Pro Football Focus analytics) and doing everything necessary to put together our roster.”

On Friday, the Elks saw first-hand in their opponents how quickly and dramatically a turnaround can come in the CFL: the Lions won just five games and missed the postseason in 2021; this season they’ve already won a dozen games and have clinched a home playoff game in Vancouver.

“It has a similar feeling to when I was in B.C. last year,” said Elks linebacker Adam Konar, who was a member of the 2021 Lions. “I feel like we do have a lot of good pieces in place on this team, and if we’re able to bring back most of the guys we have then we can start from Day One next year with a confident group and a more familiar group.

“The first year together with a new team is tough: you’re trying to get know each other, you’re trying to figure each other out, so it’s tough to mesh, so I feel super optimistic, especially If we get some guys healthy next year, that we’ll have a good team.” 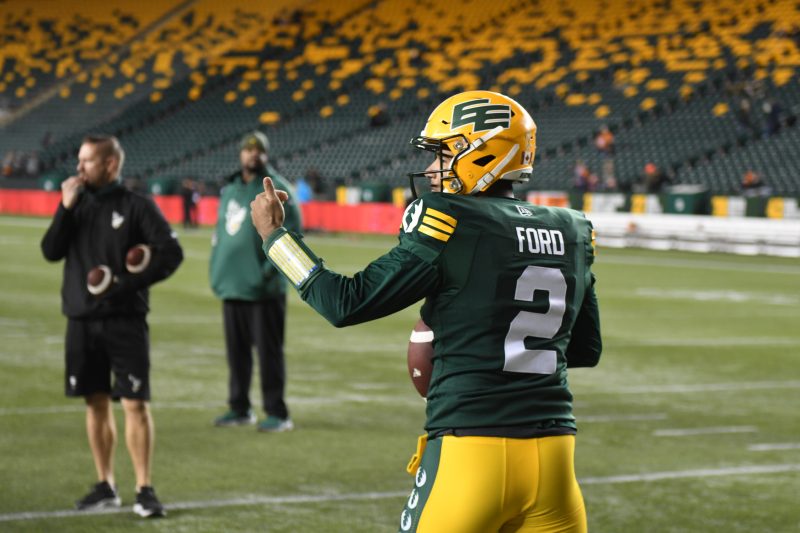 Ford was one of the many Elks sidelined by injury in 2022, missing eight games during the heart of the season between July and September.

“There’s a lot of things I’ve had to adjust to throughout my rookie year,” said the Niagara Falls native, who provided one of the highlights of the EE season when he won his first CFL start on Canada Day in Hamilton, “but I’m excited to see where next year goes.”

No Rest During the Offseason

So how will the Elks be spending their winter? For Ford, the training starts right away. It will be a busy offseason for the 24-year-old, who will become a father in December.

The six-foot-five, 295-pound Ceresna, a physical specimen by any football standard, will spend the next month or so doing yoga, before he once again begins hitting the weights in preparation for 2023.

“Obviously to not make the playoffs and fall short of where we want to be is not good, so it definitely leaves a bitter taste in your mouth and it’s just something that you’ve got to use for fuel going into next year,” said Ceresna.

“It starts now, so it’s just doing everything in my power and everyone who’s going to be here next year’s power to turn this ship around and start winning football games.”

And until the Grey Cup is back in Edmonton, Jones won’t even entertain the idea of decompressing.

“I don’t know what that is,” Jones said. “Decompressing to me is winning games. The 24 hours you have after winning a game is decompression time, so we’re already well into what we’re going to do in the offseason.”