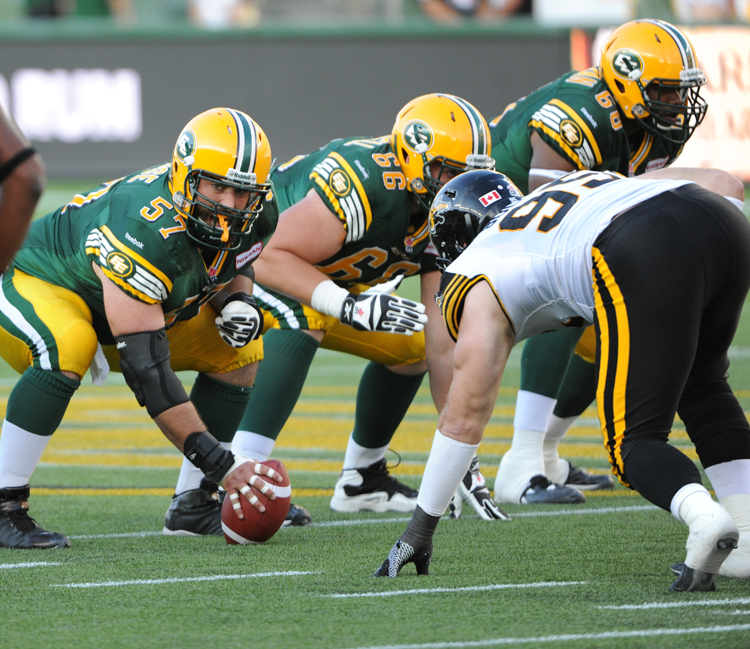 But whether he was in uniform with the Edmonton Chargers, Austin O’Brien Crusaders, Edmonton Wildcats, or Alberta Golden Bears, not once did Hinse get to play at Commonwealth Stadium.

So Hinse thinks it’s pretty awesome that his alma matter is getting that opportunity Saturday as part of a very special doubleheader on The Brick Field at Commonwealth Stadium.

The action starts at noon with the Golden Bears taking on the Calgary Dinos in Canada West regular season competition, followed at 5 p.m. with the Edmonton Elks hosting the Toronto Argonauts in a CFL Week 19 clash.

It's 𝗗𝗢𝗨𝗕𝗟𝗘 the Green & Gold on October 15th at Commonwealth! 🏈

UAlberta students can claim their 𝗙𝗥𝗘𝗘 ticket at the link below. @UABearsFootball vs Dinos at NOON / @GoElks vs Argos at 5 p.m. See you there! 🐻 🦌

“Up until my first (CFL) training camp with Edmonton, I never actually stepped foot on that field,” says Hinse, an offensive lineman spent five seasons with the Green and Gold after being drafted out of the University of Alberta in 2009.

“I wish I would have because that would have been really cool. Foote Field is a beautiful venue and a nice stadium, but nothing matches the energy of a proper full-size stadium with the names up on the Wall of Honour and the advertising and stuff like that. It just gives it a cool vibe.”

Hinse will be part of Saturday’s EE alumni autograph session, which is free for all attending the game and will take place on the south concourse for an hour prior to the Elks game kicking off.

Any trip back to Commonwealth Stadium brings back memories for Hinse. He appeared in 44 CFL regular season contests with Edmonton between 2009 and 2013.

“My first game was really cool, just getting to play pro football. Really, what’s better than that? Especially when you grow up playing,” Hinse, 35, says. “I remember that day like it was yesterday.”

Hinse played for the Golden Bears in 2005, 2007 and 2008, and was named a Canada West All-Star in the latter two seasons. Edmonton selected the academic All-Canadian 11th overall in the CFL Draft on May 2, 2009.

“The fact that they picked me so high, higher than I thought, was pretty exciting for me,” Hinse says. “I didn’t know that Edmonton was going to draft me. I could have gone to any team, but it was really special to get that phone call.”

Hinse modeled his game after current Golden Bears head coach Chris Morris, who played for the Green and Gold from 1992 to 2005 and is member of the EE Wall of Honour.

“He was a very aggressive player, and I liked watching him play,” Hinse says. “I got to know Chris a little bit after the fact, too, so it was cool watching him play and then getting to know him after, as well.”

Tickets for Saturday’s doubleheader are available through Ticketmaster. Tickets are good for both games.