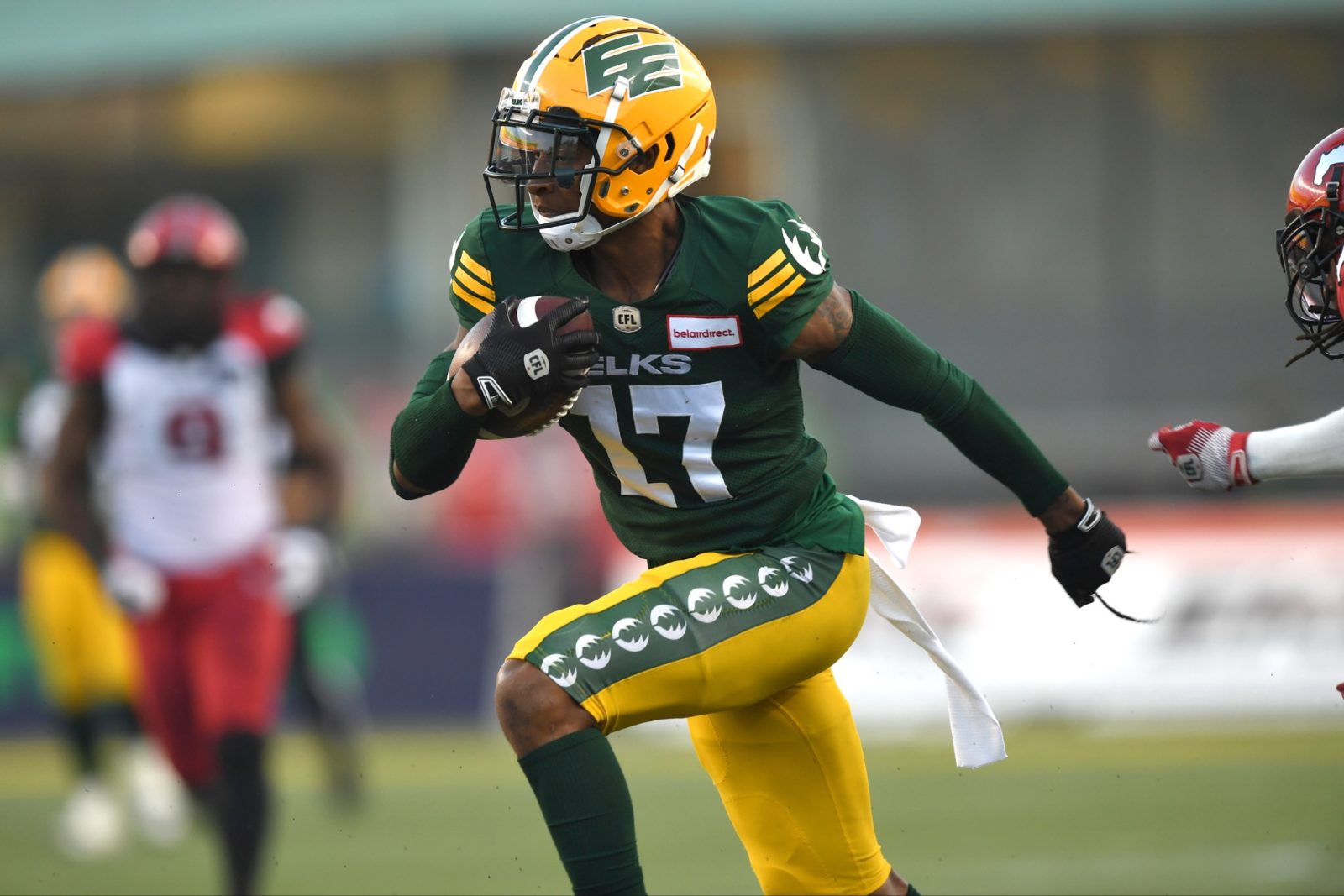 Dillon Mitchell is achieving so many milestones with the Edmonton Elks, that the receiver/returner soon won’t have any left to reach without one-upping himself.

Since his first game in Green and Gold last month, the former Minnesota Vikings draft pick has made a weekly habit of spectacular feats that haven’t been seen around these parts for some time.

In only four outings, Mitchell has racked up 256 receiving yards along with 118 return yards, and has scored a touchdown. On Saturday in Edmonton’s 56-28 loss to the Calgary Stampeders at The Brick Field at Commonwealth Stadium, Mitchell delivered his first 100-plus yard receiving game in the CFL.

He’s yet to go four quarters without doing something that leaves Edmonton football fans in awe while Elks communications staff are researching the record books. Each play with Mitchell on the field has potential to become the TSN Highlight of the Night.

“I keep saying every week, I want to keep making plays and I want to keep building the energy, so everyone knows that … I’m trying to make something happen for the team,” the 25-year-old said following Saturday’s game during an appearance on 630 CHED, radio flagship of the Elks.

In his CFL debut, against the Ottawa RedBlacks on Aug. 19 at TD Place Stadium, Mitchell made an immediate impression with an explosive 54-yard punt return, although the play was wiped out due to penalty.

So in his second game with the Green and Gold, against the RedBlacks on Aug. 27 at Commonwealth Stadium, Mitchell turned on the accelerators again, only this time they were no flags on the field to spoil his 33-yard punt return, which stands as the longest punt return by an Edmonton player longest since Christion Jones’ 41-yard runback in Week 18 of the 2019 season. Mitchell was also utilized in Edmonton’s passing attack for the first time and had catches of 45 and 12 yards.

In Mitchell’s third game, the Labour Day Classic at McMahon Stadium in Calgary, the Memphis native had a game-high six receptions for 79 yards, including a 48-yard reception in the endzone on a pass from Taylor Cornelius that stands as Edmonton’s longest catch for a touchdown since a 77-yard receiving TD by Shai Ross in Week 9 of last season.

On Saturday against the Stamps, Mitchell led all players with 120 receiving yards, the most by an Edmonton player in his first CFL season since Brandon Zylstra had 186 yards receiving in Week 20 of 2016. One of Mitchell’s five catches on Saturday went for 67 yards, the Elks’ longest reception this season. That reception also gave Mitchell three consecutive games with a catch of at least 45 yards, the longest such streak by an EE player since Bryant Mitchell in Weeks 17-19 of 2018.

“I knew that I could come out here and make a splash, even during the middle of the season,” Mitchell, who signed with the Elks on July 29, said during his CHED appearance. “It’s just coming out here and putting the work in. So I felt like I could do it, but definitely I want to play at a higher level.”

Considering all he has accomplished in just four contests, there’s every reason to think the six-foot-one Mitchell hits new heights over the five games remaining on Edmonton’s 2022 regular schedule. The University of Oregon product has quickly established himself as one of the most exhilarating players to join the Green and Gold in years.

“I think the organization believes that I can make plays, and they have the confidence in me in this building,” Mitchell said on CHED. “But going forward for the next five games I want to make sure I separate myself as being one of the best wide receivers in the CFL.”