Wall of Honour: Edmonton is like home for Hollimon 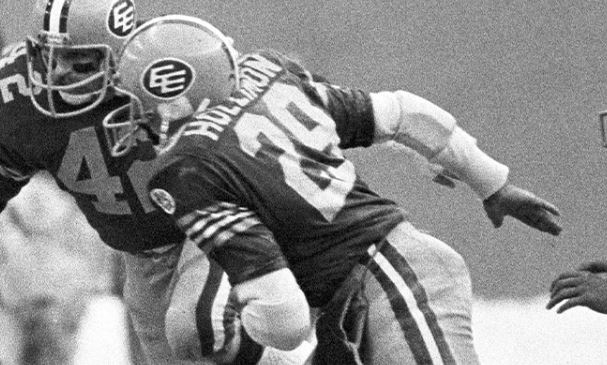 Wall of Honour: Edmonton is like home for Hollimon

On Saturday night at The Brick Field at Commonwealth Stadium, Green and Gold greats Jim Germany, Joe Hollimon, and Ed Jones will be inducted to the EE Wall of Honour at halftime of the Edmonton Elks first ever Homecoming Game.

Homecoming is the perfect word for Joe Hollimon because the legendary defensive back who played for the Green and Gold from 1976 to 1985 really is coming home.

Hollimon was 23 years old when he first arrived in Edmonton in pursuit of a professional football career. He found that and so much more beyond the gridiron during his 10 years in the capital region.

“My youngest son was born in St. Albert, so he is virtually a Canadian citizen, and my oldest son went all the way through Grade 10 in the Edmonton area,” says Hollimon. The 69-year-old returned to Alberta’s capital regularly in his current role as representative with Primerica, the financial services company company he joined at the end of his EE playing days.

“Edmonton is still home to me in a lot of ways,” continues Hollimon, who now resides in Everett, Wash. “I physically don’t live there, but I grew up in Edmonton.”

When Hollimon retired in 1985 after around 150 combined regular season and playoff games with the Green and Gold, he was a five-time Grey Cup champion, three-time CFL West All-Star, one-time CFLPA Top Defensive Back, and one-time CFL All-Star. The Arkansas State product electrified fans, picking off 36 passes (fifth most in team history) in 136 regular season games, with a franchise-record seven interceptions returned for a touchdown.

“It was a joy to play at home on the field in Edmonton during my entire 10 years there,” he says. “It was a joy because the fans always came to the game ready to root and get it on. I would put our fans in Edmonton in my time up against any other fans in the entire CFL.”

While he hasn’t lived in Edmonton for close to four decades now, after Saturday, Hollimon will live forever in the EE annals, with his plaque installed on the Wall of Honour.

“I never thought this day would come,” Hollimon says.