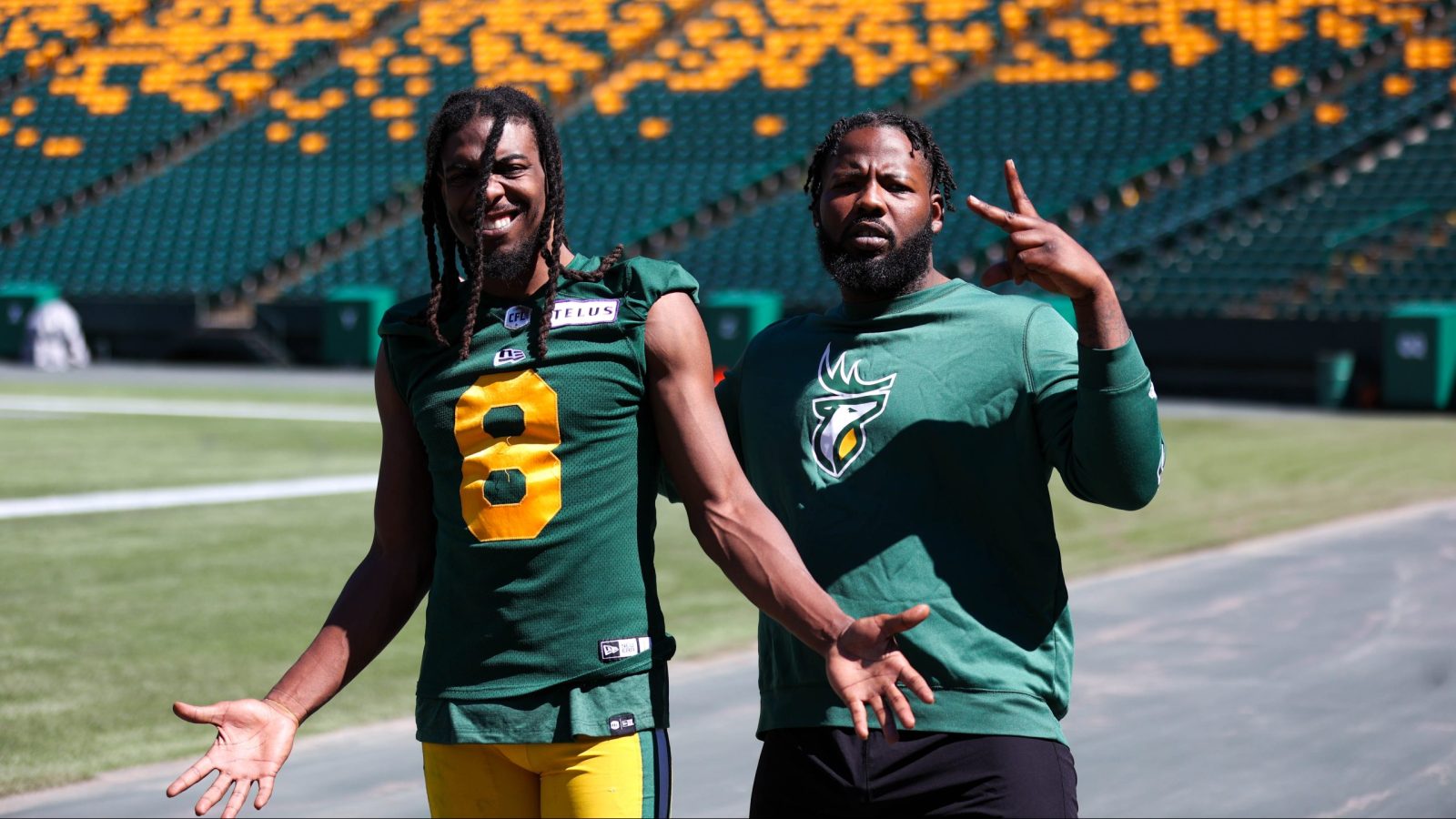 They’ve got bars and they’ve got beats. The only thing this duo doesn’t have is a name.

“We do have to come up with one,” adds DC NoName.

Since discovering their shared passion for making music, DC NoName and LVO Ross, aka Edmonton Elks teammates Duron Carter and Daniel Ross, have collaborated to record half a dozen tracks, including “Cruising U.S.A.”, which fans can hear as part of the in-stadium music when the Elks host the Saskatchewan Roughriders at The Brick Field at Commonwealth Stadium on Saturday night.

“When we had these long breaks during training camp, we were sitting in the car playing each other’s music, and just decided we need to do a mixtape or we need to do a couple songs together and get in the studio and it just trickled down from there” says defensive lineman Ross.

“I like making music in my spare time, it’s something I do when I’m at home, and Ross played me some of his stuff, and I was like, ‘definitely we should link up’, and we went into Soundproof Studios here in Edmonton, and we’re still in there every week,” says Carter, who hails from Florida.

Not unlike the CFL careers of Carter and Ross, DC NoName is more of a veteran on the mic while LVO Ross is still relatively new to the game.

“I always loved music growing up as a kid, I just never was too involved with it, like rapping,” says the 29-year-old Ross, a native of Louisville, Kent. (LVO stands for “Louisville’s Very Own”). “But during the pandemic my little brother taught me how to get my words together, he told me how to write a little bit and I just kept going with it, going to the studio by myself making music.”

Opposite the hard-hitting nature of the duo’s day job, “Cruising U.S.A.” is a laid-back joint, its lyrics evoking images of rolling down a boulevard soaked in the summer sun. Once inspiration hit, the teammates needed less than two hours to put the entire track together.

“We’re really a vibe thing, so whenever the beat comes on, however the vibe feels … whatever comes to my head, I get it, and he has to catch up with it,” says the 31-year-old defensive back Carter.

“He will go first, get the chorus down, and as he’s going down doing the chorus, punching in, doing everything he needs to do, I’m writing my lyrics so I can piggyback off what he’s talking about, trying to get the same feel so the song can come together,” Ross explains.

According to DC NoName and LVO Ross, “Cruising U.S.A.” isn’t even their best track. And they’re only just getting started.