Mike Walker was at his wife’s family’s cabin in Washington state when the phone call came.

Cellular reception near the lake wasn’t the greatest, but clear enough to hear former Edmonton teammate Pierre Vercheval tell Walker he was going into the Canadian Football Hall of Fame.

Walker leads a trio of EE alumni who will be enshrined when the Hall of Fame inducts both its 2020 and 2021 classes on Friday in Hamilton. Green and Gold greats Greg Vavra and Don Wilson are also part the 13 inductees being feted as part of a weekend celebration that includes the Hamilton Tiger-Cats hosting the Calgary Stampeders on Saturday.

He anchored some of the best defences in CFL history, had one season with 21 sacks and helped to capture the 1986 #GreyCup with the @Ticats

A defensive tackle, Walker played 10 seasons in the CFL from 1982 to 1991, winning the Grey Cup once and being named a CFL All-Star on three occasions. He ranks 14th on the CFL all-time leaderboard with 95.5 sacks.

“Every pro player wants to end their career knowing that they’ve got a chance to be in the Hall of Fame,” Walker says. “Once you get in there it caps off your total career, it’s the ultimate of all the work, blood sweat and tears that you put into the game. That’s the payoff.”

Walker spent eight years holding the line in Hamilton, before moving west in 1990. He was originally planning to sign with the B.C. Lions so he could be close to his home in Seattle, but a phone call from EE general manager Hugh Campbell, a fellow Washington State University alumnus, changed his mind.

“We started talking about Wazzu back in the day and I had a great conversation with him and that’s what brought me to Edmonton,” says Walker.

The six-foot-three, 255-pound tackle joined an EE defence that terrorized opposing quarterbacks to the tune of a CFL-high 51 sacks in 1990.

“When I first got there, I was looking down the line and we had Stewart Hill, Brett Williams, Michel Bourgeau, Leroy Blugh, and I was like, ‘Wow. I left a great D-line and I came to another great D-line,” said Walker, whose nine sacks were seventh most in the CFL in 1990. “We had a great season that year.” 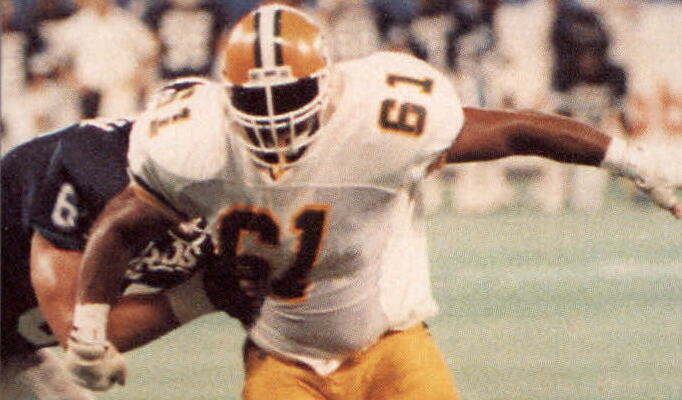 While Edmonton ultimately lost the Grey Cup to the Winnipeg Blue Bombers in 1990, that season was a blast for everyone. The beloved cast of characters featured several future HOFers (Blugh, Rod Connop, Tracy Ham, Vercheval, Walker and Gizmo Williams among them) and delivered two of Edmonton’s signature Battle of Alberta victories, trouncing Calgary 38-4 on Labour Day, when Walker had a record four sacks, then blasting the Stamps 43-23 at McMahon Stadium in the West Division Final.

“Man, that locker room was alive every day,” Walker said. “I had fun. They took me right in I had no problems with anybody on that team … we had some great players and great people.”

Since retiring after the 1991 season, Walker has worked in several coaching roles, including a stint back in Edmonton as defensive line coach in 2010 and 2011. His call to the Hall came nearly three full decades after his last game as a player, and when the 2021 induction ceremony was postponed because of the pandemic, he had to wait another 12 months to get his Hall of Fame bust.

“When I look back, I started playing football when I was 8 years old, and I’ve been associated with football for at least 45-50 years, every year, year in, year out,” the 63-year-old Walker said. “So this is the ultimate. That’s why I can’t wait to get there.”

Learn more about the induction ceremony and classes at the Canadian Football Hall of Fame.