Journey Back to the CFL Brings Arceneaux to Edmonton

Journey Back to the CFL Brings Arceneaux to Edmonton

The locker room is just about empty. Practice wrapped up an hour or so ago, and players now have some time after lunch before meetings and film later in the afternoon.

In the quiet sits Emmanuel Arceneaux. These tranquil moments provide opportunity to reflect on his new surroundings.

It’s been four months since he signed with the Edmonton Elks, two and a half weeks since he arrived at Commonwealth Stadium for training camp, and a few days since his first time wearing Green and Gold, and yet, it’s still a bit surreal that the star former B.C. Lions and Saskatchewan Roughriders receiver is running routes with the herd.

“I never saw this coming,” says the 34-year-old, a three-time CFL West All-Star. “I kind of thought that door was closed to the Canadian Football League, but I’m blessed with another opportunity here in 2022.” 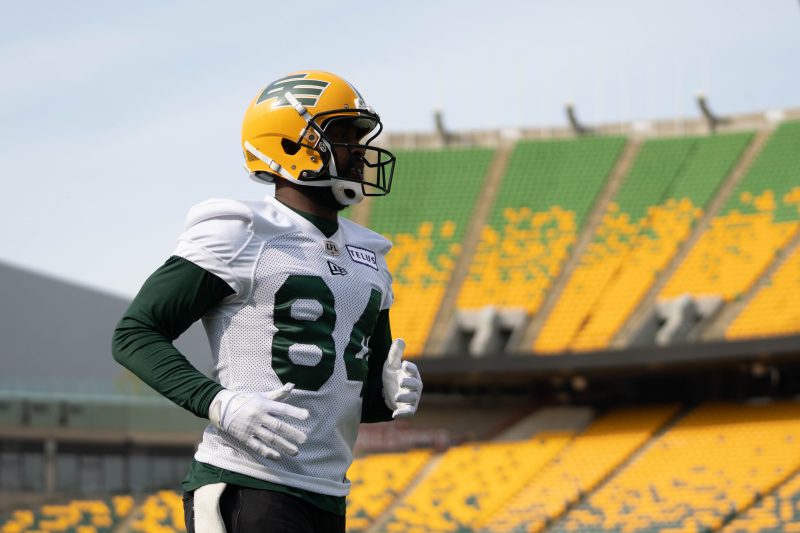 Arceneaux last played in the CFL in 2019 with the Riders. After the pandemic led to the 2020 CFL season being cancelled, Arceneaux was mentoring young athletes at Built 4 It Athletics in Prosper, Texas.

At that gym, Arceneaux met Jonathan Bane, quarterback for the Frisco Fighters of the Indoor Football League. Bane convinced Arceneaux to join the Fighters, which practically played in Arceneaux’s backyard, at the Comerica Center in Frisco, Texas.

“It was 10 minutes away from the house, and if I was going to play again, I needed film, because in football that’s your resume,” says Arceneaux, who had a team-leading 40 receptions and six touchdown catches, while also scoring five rushing touchdowns in 13 games with the Fighters.

“You’re not out punching the clock, sitting in a cubicle or anything like that, you have to be out there being active and being a player to have the career that I’ve had and the time that I’ve been in the game,” Arceneaux continues. “The chance is it would probably be harder if I had sat out (the 2020 and 2021 seasons), talking about playing in ‘22. No one would take you seriously, so I think (the IFL) was the league of opportunity for me that got me the opportunity to be here in Canada once again.”

Opportunity came in the form of a call form current Elks assistant general manger Geroy Simon, who knows first hand what Arceneaux provides: The pair were teammates in B.C., and rank first and second, respectively, in franchise history for career receptions.

“I guess they were looking for players to restore the culture and get people excited about football in Edmonton again, Manny Arceneaux was probably a name that came up, and I’m thankful for that opportunity” said Arceneaux. His mindset, he says, is  to lead by example through a work ethic second to none.

“When I got on the plane to come up here, my first thought is, how can I make this Edmonton football team, then after that, how can I make those around me better, because I realize it’s never about me,” Arceneaux says.  “I’m just a piece to the puzzle, but I have a way when people gravitate towards me due to my energy and how I carry myself and it’s kind of contagious … I think that’s a gift and something that I bring to any organization, regardless of what’s going on, if it was football, if it was me coaching youth, if it was me coming in just working.”