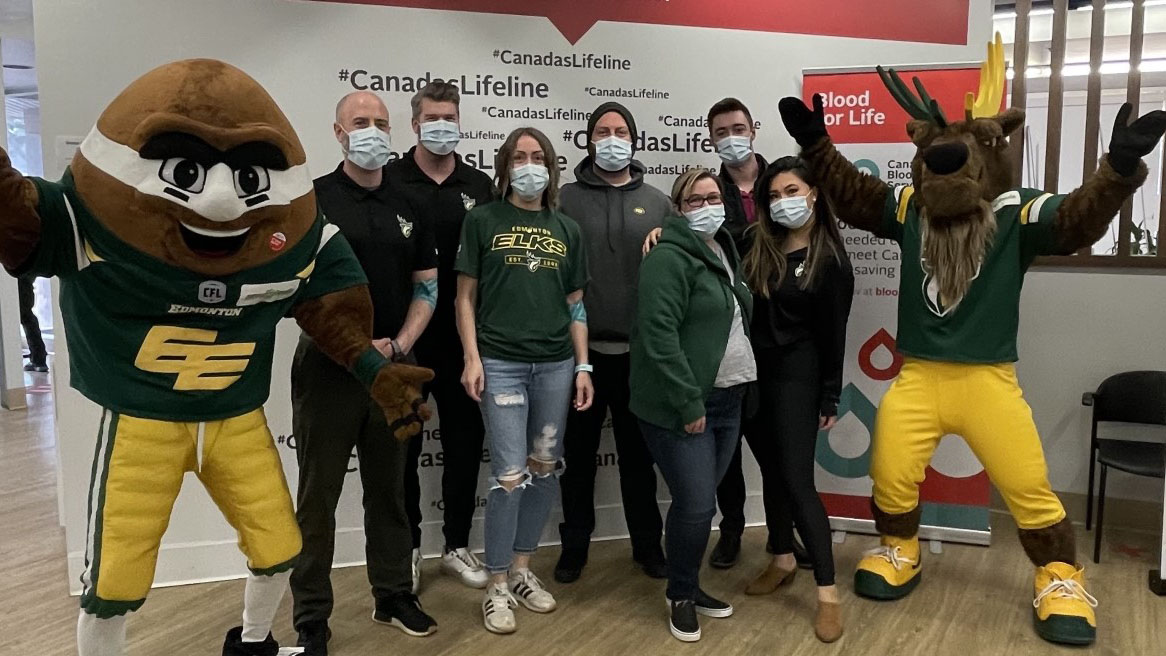 It wasn’t something that had really crossed Brian Cheeseman’s mind.

Even while being raised in a household where it was a common practice, he didn’t spare much thought.

It wasn’t until a couple years ago that a traumatic incident led to him becoming a blood donor for the first time.

Now the Elks Director of Sports Medicine and Rehabilitation is a regular donor and inspiring members of the Green & Gold Family to do the same, with a staff blood drive at the Canadian Blood Services donor centre in Edmonton on Friday.

“It’s something that’s so simple to do and Canadian Blood Services have a wonderful group of people here in Edmonton helping us spearhead our first staff donation day,” Cheeseman says. “Hopefully people that donate on Friday follow the trend and continue to donate.”

Cheeseman first gave blood in 2019 while he working as Head Athletic Therapist for the Edmonton Oil Kings of the Western Hockey League. The girlfriend of Oil Kings physiotherapist Matt Goertzen had been hospitalized after being struck by a vehicle and Cheeseman reached out to see what the team could do to help. When Goertzen suggested donating blood, Cheeseman and the Oil Kings players were more than willing to roll up their sleeves.

“The majority of us were first-time blood donors,” Cheeseman says, “and going through the process the first time, you sit in the chair as they’re taking your blood and you wonder, why did it have to take a tragedy for myself and for those players at the time to take up this cause?

“Because it costs you nothing other than a few minutes of your day and the impact you can have on someone’s life when they’re in a situation like hers by simply giving up a portion of your day is something that I think we underestimate,” he adds.

An Elks office staff day out to donate blood! Thank you to @CanadasLifeline for helping us coordinate this effort. Can’t wait to be back donating later this year! #GoElks pic.twitter.com/NNvo6HKtR5

Blood, plasma, platelets, stem cells, organs and tissues are a critical part of everyday medical care including major surgeries, medical procedures, cancer treatments and managing diseases. Every 60 seconds someone in Canada needs blood, and meeting that demand depends entirely on the generosity of people like Cheeseman’s father, a lifelong donor.

“Growing up, I remember the phone ringing every couple of months and it being someone from Canadian Blood Services asking for him to come give a donation,” Cheeseman says. “When you’re younger that stuff doesn’t really register with you as much until something like (Goertzen’s girlfriend being hospitalized) happens or a major tragedy happens.”

One such event was the Humboldt Broncos bus crash on April 6, 2018, in which 16 members of the Saskatchewan Junior Hockey League team lost their lives. In the wake of that tragedy came the creation Hockey Gives Blood, a non-profit society partnered with Canadian Blood Services that strives to engage and educate the hockey community about the importance of blood and stem cell donation.

Cheeseman marvels at the impact Hockey Gives Blood has made in just a few short years. Now he wants to see a similar wave sweep through the football community, starting right here with the Green & Gold

Book your appointment to donate blood now at http://www.blood.ca