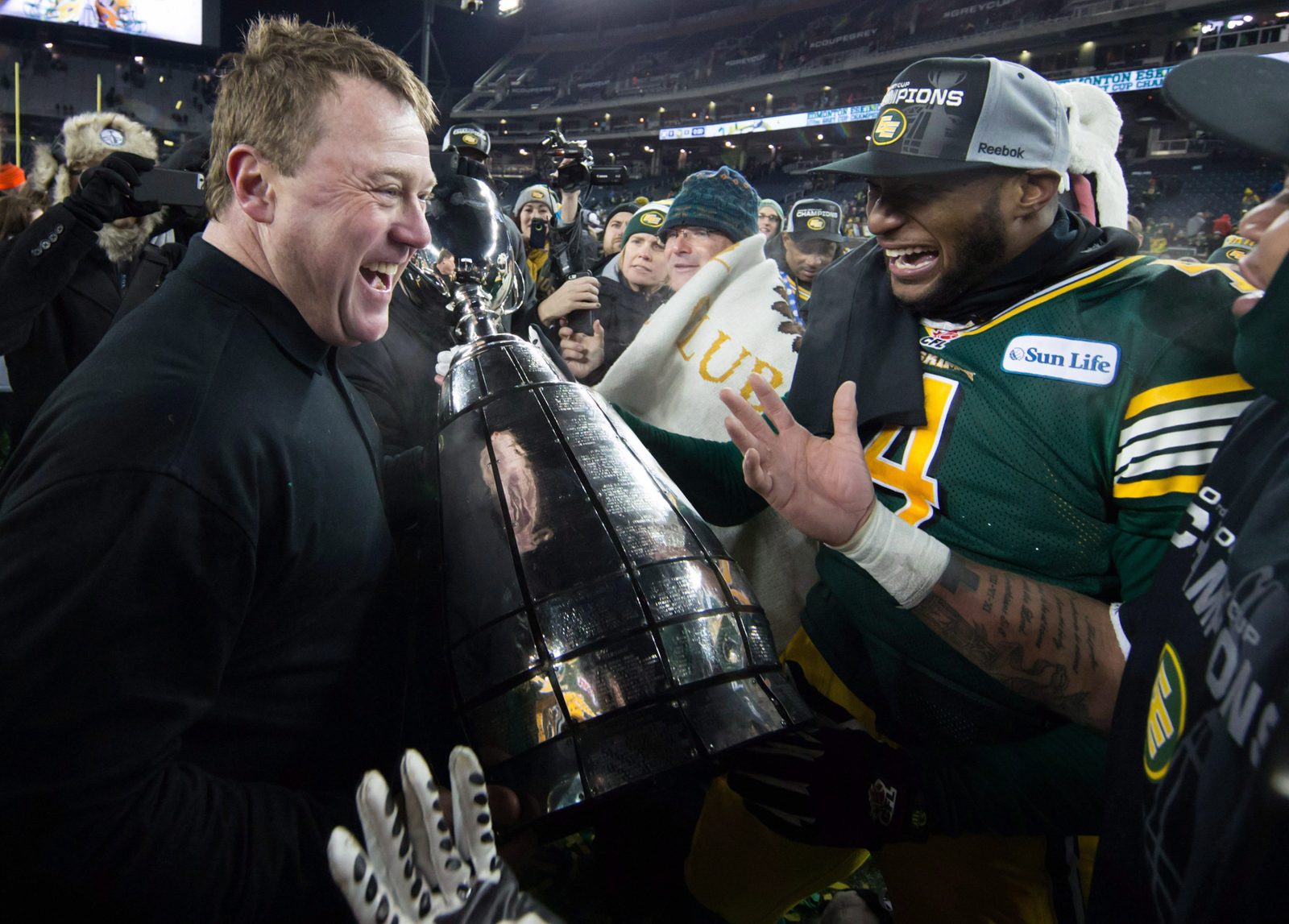 For nearly two decades, Chris Jones has been patrolling a CFL sideline.

Now, the man in black is back in Green and Gold.

Jones, who was announced December 21st as the Edmonton Elks new general manager and head coach, returns to the City of Champions after a two-year stint with the Double E from 2014 to 2015.

While his first stop in Edmonton was just two seasons, he certainly made a splash, delivering the franchise’s 14th Grey Cup before leaving for a promotion with the Saskatchewan Roughriders.

Plenty has been said regarding the South Pittsburg, Tenn. product, but one thing is clear some six years later – Jones’ re-hiring in Edmonton means the Elks have landed a proven winner.

“This is one of the flagship places that you could ever be if you’re in the Canadian Football League,” said Jones shortly before his introductory press conference.

“If you look around the locker room at all the names and all the championships and things that have come through this room and this building, that’s what you want to be a part of.”

When you win, you’ve got a target.

And if there’s one thing Jones does, it’s win.

The numbers don’t lie when it comes to his effectiveness as a coach in the CFL, dating back to his lengthy time in Montreal from 2002-07.

As a rookie defensive line coach with the Alouettes in ‘02, Jones’ earned his first Grey Cup win – a game Edmonton fans witnessed first-hand, and likely would love to forget.

A Grey Cup win in Calgary as the defensive coordinator in 2008 and another in 2012 with the Toronto Argonauts followed.

While he wasn’t a head coach from 2002 to 2013, his teams and his defence delivered, as the Als, Stamps, and Argos combined to go 135-80-1 in the regular season, all while Jones earned a reputation as one of the best defensive minds in the CFL.

The cynics will say Jones was just a cog in the machines that were the Alouettes and Stamps. Football is a team game, after all.

But if you want clear examples of Jones’ individual impact on franchises, both Edmonton and Saskatchewan provide exhibits A and B respectively, as Jones engineered turnarounds both times after last-place finishes in the CFL’s West Division before his arrival.

“He’s been involved in five or six different turnarounds, a couple when he was in charge, and several others where he was an important facet of a team,” said Elks Board Chair Ian Murray.

“It’s been clear through our research and the interviewing process that he knows football as well as anybody that we had the opportunity to talk to.”

In other words, the expectation is Jones delivers a similar turnaround in Edmonton after a trying 2021 campaign.

LEARNING FROM THE BEST

Jones’ earliest taste of the CFL came in 1999 as a guest coach at training camp in Edmonton under Don Matthews.

While Jones would spend the next three seasons as the defensive line coach and recruiting coordinator at Tennessee Tech, it wouldn’t be long before Jones and Matthews were together on a CFL coaching staff

“In ’02 I worked with Don Matthews and we took over a football team and we made all the different changes in the offseason and then once you put your football team together it becomes what type of preparation do you put in,” Jones said of the early days of the Alouettes rebuild.

“That’s where I kind of cut my teeth and learned in this league – under Don.”

Matthews, who ended his lengthy CFL coaching career with 231 wins, wasn’t the only legend Jones had the good fortune of working with. 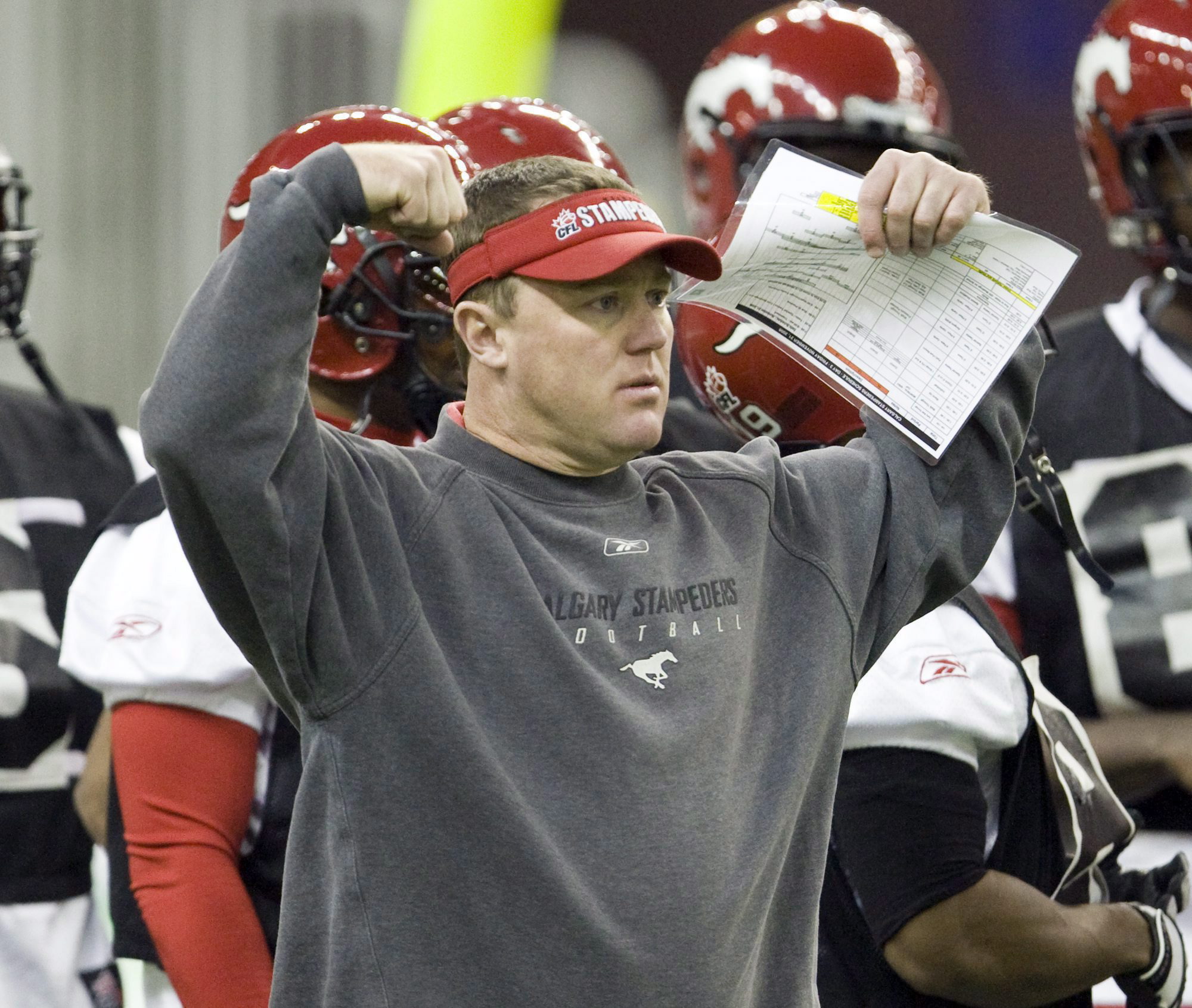 A four-year stint under John Hufnagel in Calgary followed.

Combined in Montreal and Calgary, Jones was getting a first row seat to CFL coaching excellence.

“We won a ton of football games there as well,” Jones said of his stay in the Stampede City. “The thing about it is, Don’s personality and Don’s way of preparing was way over here, and Huf’s was way over on this side, so I got to learn from either side of the equation.”

“Both work, so I was able to see that a lot of the common denominators was the preparation that was put in. How hard you practice, how hard you prepare. And everywhere we’ve gone we’ve taken those type of philosophies and we’ll draw on those here.”

After spending 2016-2018 in Saskatchewan, Jones headed south to the NFL.

A job offer from then Cleveland Browns head coach Freddie Kitchens, who quarterbacked the Alabama Crimson Tide during Jones’ time as a graduate assistant in the late ‘90s, was too good to pass up.

An apt description of fulfilling a boyhood dream that proved more roller coaster ride than trip to the Magic Kingdom.

BREAKING: @sskroughriders head coach and GM Chris Jones is leaving the #CFL to take a job with the Cleveland @Browns

After serving on the coaching staff as senior defensive assistant in 2019, Jones watched as Kitchens and his colleagues were sent packing, while he stayed one more season, working primarily in analytics, including grading quarterback Baker Mayfield.

“It was an opportunity, quite honestly, to do something that you look at as a kid like going to Disney World,” Jones said at his introductory press conference.

TIME FOR A LEGACY

When it comes to what’s next, Jones wants his name in the same category as two CFL greats.

Wally Buono and the aforementioned Hufnagel.

Two CFL legends, one of whom in Buono who just happened to help align the stars on Jones reuniting with the Double E.

“What I’d like to do is return this organization to where it should be and have a lot of fun doing it.” – Elks GM/HC Chris Jones.

“Now it’s time to do it like Wally and Huf and do it for a long time and have fun doing it. That’s kind of our goal.”

With a four-year contract in Edmonton, Jones will be given every opportunity to cement his legacy in Green and Gold and improve on his already impressive head coaching record with the Double E of 26-10.

“I’m 54, it’s time for me to do more in line with what Huf and Wally did and that’s go somewhere and stay for a long time. We stayed seven years in Montreal, and it was a very good time. I learned a lot,” Jones said of his early days in the CFL.

“What I’d like to do is return this organization to where it should be and have a lot of fun doing it with a lot of great players and coaches.”