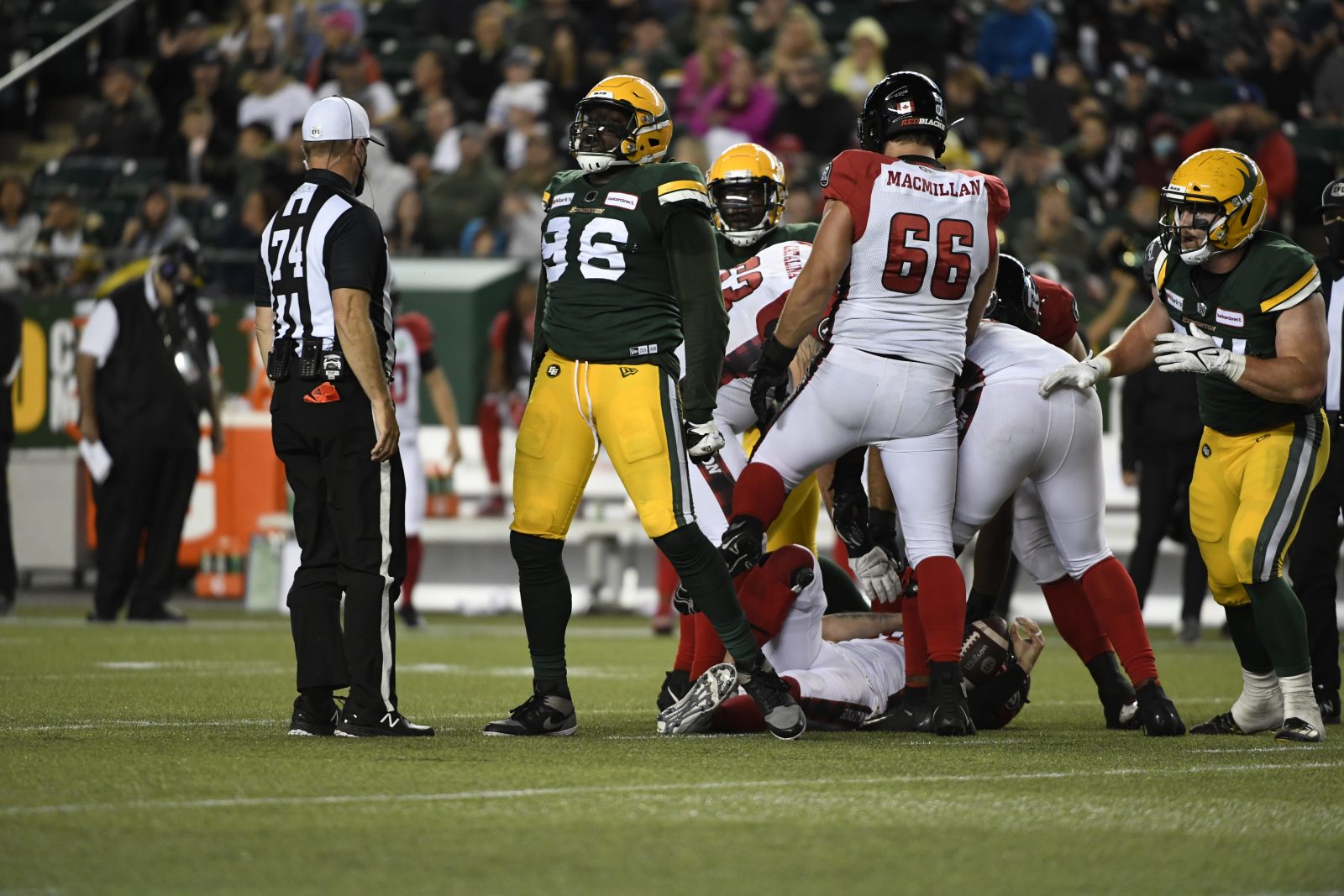 That was the difference Saturday night for the Edmonton Elks, as despite James Tuck’s best efforts on the last play of the game, Edmonton fell just short in a 16-12 setback to the Ottawa RedBlacks at The Brick Field at Commonwealth Stadium.

It was a disappointing way to end an exciting night for the Elks, as the club ushered in a new era of Edmonton football history to start the 2021 CFL regular season.

Edmonton’s first game in 651 days featured a pre-game tribute to Joey Moss, a salute to alumni, and the unveiling of a new mascot among other things in front of more than 30,000 fans.

And while those moments off the gridiron were certainly wins, it was Tuck that nearly delivered the biggest moment of the evening, coming up just inches short of handing Edmonton a walkoff win. 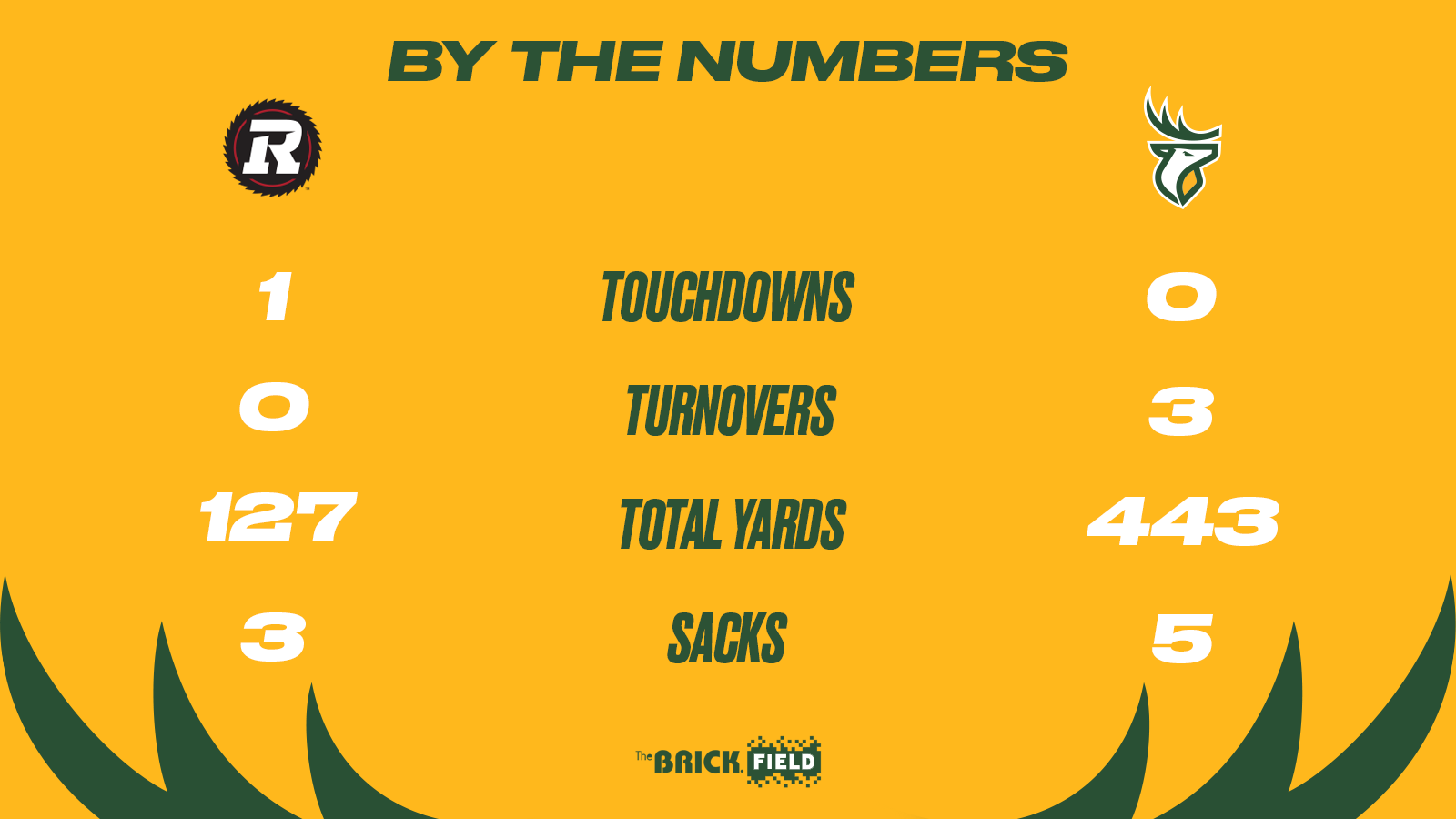 The Canadian fullback’s near heroics were necessitated for Edmonton despite outpacing the RedBlacks in nearly every facet of the game.

Compare those numbers with Ottawa quarterback Matt Nichols who passed for just 71 yards, and running back Timothy Flanders’ 39 rushing yards and the numbers would suggest an Elks runaway. 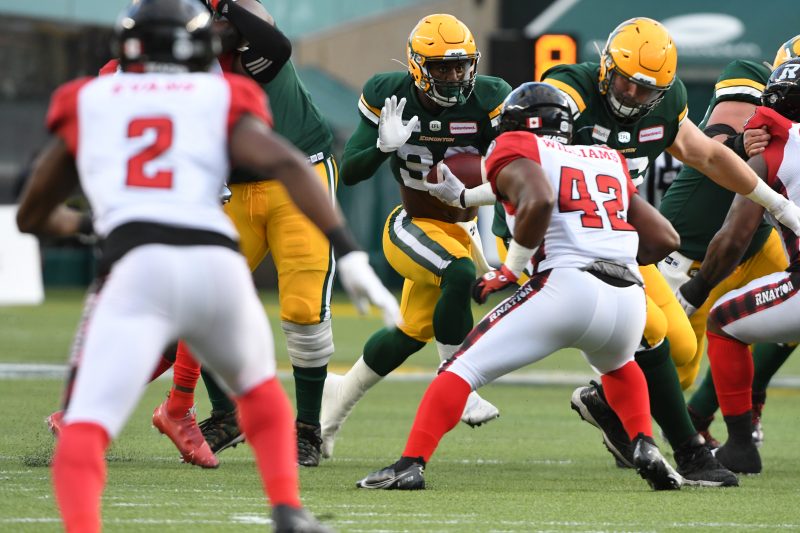 While Edmonton won the battle in almost every key statistical category, it was Ottawa that won the turnover battle.

The game’s turning point came with just 5:03 to go in the fourth quarter when defensive back Abdul Kanneh secured a 102-yard pick six to give Ottawa their first lead of the night.

Kanneh proved to be a thorn in the side of the Elks all night, with his first pick of the night coming earlier in the third quarter, before the seven-year CFL vet ended Edmonton’s last ditch effort to score when he tackled Tuck on the doorstep of the goalline with zeros on the clock.

Those key moments were enough for Ottawa, who snapped a 15-game losing streak dating back to 2019 despite Edmonton’s defensive dominance.

Head coach Paul LaPolice’s offence was out of sorts all night, as the Elks defence was led by two sacks from Kwaku Boateng and Mike Moore, along with a fifth from Keishawn Bierria.

Aaron Grymes also had a big night in his return to the Green and Gold, racking up a team-high seven tackles.

Who get’s your Elks Game Ball as the best player in Green and Gold from game 1? https://t.co/v5JLmBm2j1 pic.twitter.com/AjaJTksMfN

Along with those three defenders, kicker Sean Whyte also had a strong night, hitting on all four of his field goal attempts, making kicks from 12, 52, 48, and 43 yards to account for all the Edmonton scoring.

Up next for the Elks is a meeting with the Montreal Alouettes on Saturday, August 14. It’ll be Edmonton’s second home game of the season, with kickoff set for 5:00 p.m. MT (click here for tickets).