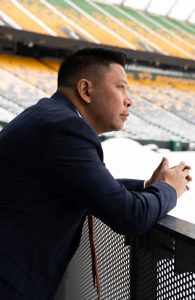 Born and raised in Edmonton, Alberta, Victor Cui is the President and CEO of the Edmonton Elks Football Club – one of the flagship franchises in the Canadian Football League and 14-time Grey Cup champions. Cui was announced as the Club’s president on January 25, 2022 and brings a wealth of global sports experience to the hometown team he grew up cheering for.:

Prior to his homecoming with the Elks, Cui rose to prominence on the global sports scene with mixed martial arts promotion ONE Championship. Cui served in a variety of roles with ONE, beginning as a co-founder and the company’s first CEO in 2010. Cui went on to become ONE’s CEO International and led multiple areas of the company’s global business. He also served as CEO of ONE Elite Agency, managing some of the world’s biggest MMA athletes and celebrities.

Over his decade-plus run with ONE, Cui played a central role in growing the company to become Asia’s largest sports media property, with broadcasts to more than 150 countries. Thanks in part to Cui’s leadership and vision, the company held a total valuation of more than $1 billion (USD) as of January 2022.

Cui’s other sports experience is extensive, as he previously worked on: the Commonwealth Games, the Sydney Olympics, the PGA Tour Bell Canadian Open Championship, the LPGA Tour BMO Women’s Open, the X Games Asia, the World Series of Pool, World Futsal and the creation of ESPN’s Martial Combat.

Personally, Cui is a graduate of the University of Alberta where he served as Students’ Union Vice President Internal while studying political science. He is a dedicated husband and father, and lives with his wife, two children, and parents in Edmonton.

Cui is a proud member of the Canadian Filipino community, with his parents moving to Edmonton from the Philippines in the 1970s. Cui and his brother’s first introduction to sport came in the form of boxing – their father’s favourite sport. Cui went on to become fascinated with martial arts, specifically taekwondo. Both he and his wife are black belts in the sport, a passion they have passed down to their son and daughter.

In addition to his professional and family commitments, Cui is an active member of the Edmonton community. He serves as a mentor for the University of Alberta’s ThresholdImpact Mentoring Service (VMS), helping develop Alberta’s next generation of entrepreneurs through guidance and support. Cui also serves as a board member for the Parkinson’s Association of Alberta – a cause which is close to his heart after his father was diagnosed with the disease.