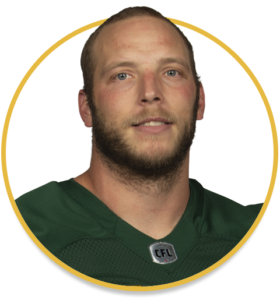 2019: In 10 games (10 starts), Draheim played at left tackle and finished with one defensive tackle and one special teams tackle.

2016: (Ottawa) Draheim appeared in two games for the RedBlacks as well as the East Final and the Grey Cup.

2015: (BC) Draheim appeared in and started 13 games as well as the West Semi-Final at left tackle for the Lions.

College: Draheim San Diego State from 2008 to 2011. He started 33 games, including 30-consectuvie starts to finish his career. In his senior season, he earned first-team All-Mountain West Conference honours.