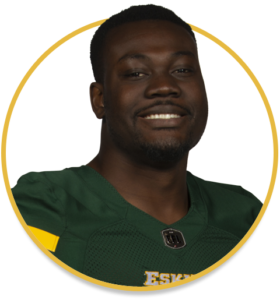 2018: In 16 games (16 starts), Boateng has recorded 26 tackles and nine quarterback sacks. Boateng also has one kickoff return for nine yards. Boateng was named the Elks Top Canadian of the Year.

2017: In 18 games (one start), The Green and Gold rookie finished with 22 defensive tackles, four quarterback sacks, and one forced fumble in 18 games played. In the West Semi-Final, Boateng recorded three tackles and appeared in the West Final. Boateng was named the Elks fRookie of the Year.