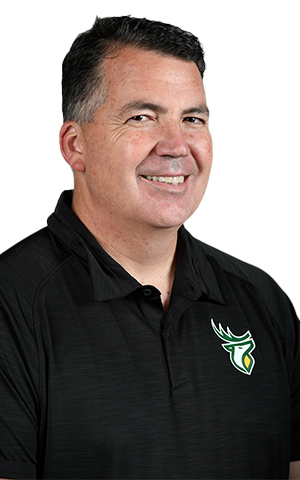 Jaime Elizondo is the 23rd head coach in team history. Along side his head coaching duties, Elizondo is also the team’s offensive coordinator and quarterbacks coach.

Elizondo held the role of offensive coordinator for the Ottawa RedBlacks from 2016-2018 — appearing in two Grey Cups in three years and winning one (2016). In his first season, he led a RedBlacks offense which saw four receivers eclipse the 1,000 yard mark (Greg Ellingson, Chris Williams, Earnest Jackson, and Brad Sinopoli).

Current Elks quarterback Trevor Harris spent three seasons under Elizondo’s tutelage, setting a career high for passing with 5,116 yards in 2018. That same season, Harris threw a CFL play-off record six touchdowns in a 46-27 win over Hamilton in the east final. In total, Harris has accumulated 13,096 passing yards and 68 touchdowns, while completing over 70% of his passes with Elizondo calling plays.

The Elks head coach began his CFL coaching career in 2008 as a wide receivers coach for the Montreal Alouettes. During that season, the Alouettes would have three different players eclipse the 1,000 yard receiving mark (Jamel Richardson, Ben Cahoon, and Kerry Watkins).

After spending the 2009 season at Syracuse University, Elizondo returned to the CFL in 2010 as offensive coordinator and quarterbacks coach with the Toronto Argonauts. He would coach a second stint with Toronto as a wide receiver coach in 2015, before joining Ottawa as their offensive coordinator in 2016.

The University of Maryland graduate departed the RedBlacks in 2019 and joined former CFL head coach Marc Trestman with the Tampa Bay Vipers of the XFL. After taking over play calling duties in week 3, the Vipers averaged over 29 points a game on offense for the remainder of the season.

Elizondo brings over 20 years of coaching experience to the Elks with experience at the CFL, NFL, College, and high school level. In addition to being a graduate of the University of Maryland, he holds a law degree from the Washington College of law at American University.