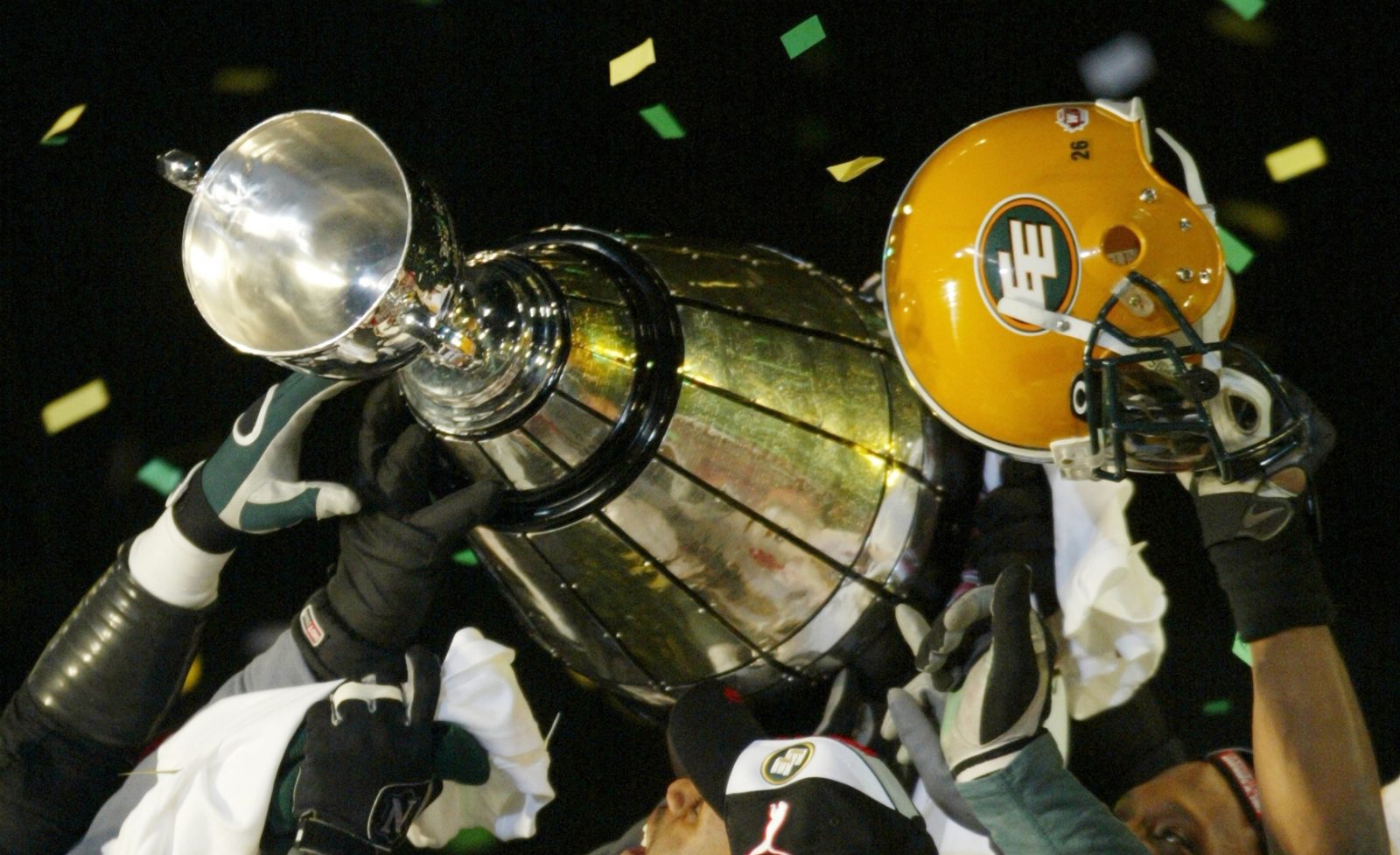 It wasn’t the MVP receiver.

It wasn’t the superstar quarterback.

No, when the Green and Gold rode through downtown Edmonton on their 2003 Grey Cup parade, the man holding the trophy was the head coach. And not because he wanted to; it’s more because, well, somebody had to.

“None of the players would carry or hold the cup. They did not feel that was appropriate for one person to be holding the cup when it (belongs) to the team,” says Tom Higgins. “I was the last choice.” 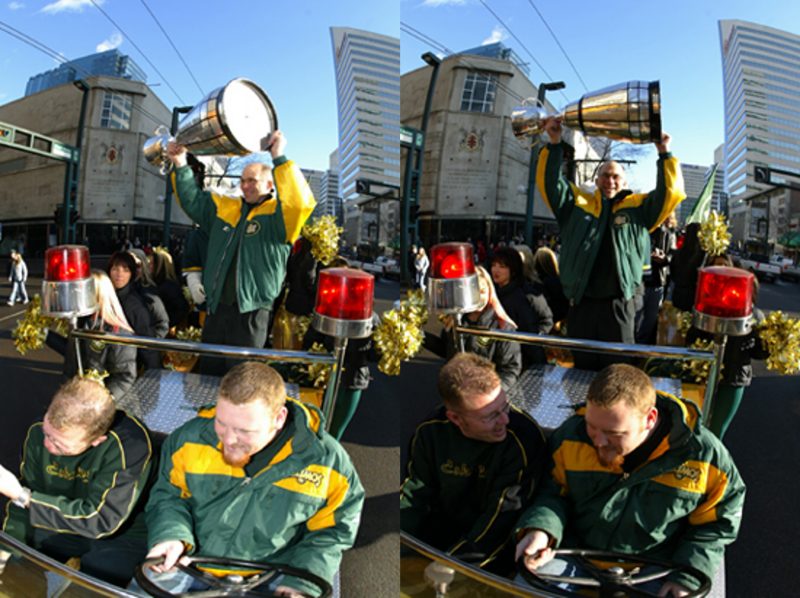 Of the many little stories that comprise the epic of Edmonton’s first CFL championship this century, that anecdote explains as well as any why the Green and Gold dominated Canadian football in 2003.

“It was an Edmonton culture that allowed us to do this,” says Higgins, head coach of the Double-E from 2001 to 2004. “We’re a family, we care more about somebody else’s success than our own personal success. And that’s when great things happen.”

With the 109th Grey Cup taking place at Mosaic Stadium in Regina this Sunday, the countdown to the big game brings back memories of the only time Edmonton has played for the ultimate prize on the Saskatchewan Roughriders’ home turf.

Nov. 16, 2003, is one of the great days in Double-E history. Not only because the Green and Gold ended a decade-long championship drought. Not just because they overcame the opponent that had spoiled their party 12 months earlier. Mostly because Edmonton’s 34-22 victory over the Montreal Alouettes in the 91st Grey Cup at what was then known as Taylor Field represented the coronation of a most deserving and truly special collection of players and people, whose commitment to a common goal transcended their considerable individual talents.

“If you look at that team, they’d been knocking on the door for two years,” says Ricky Ray, Edmonton’s starting quarterback in the 2002 and 2003 Grey Cup games. “In 2001 they lost in the Western Final, and then in 2002 we ended up winning the West Final and making it to the Grey Cup, so it’s kind of like we were taking little steps. We didn’t get all the way and win the Grey Cup, but we were getting closer, and so in 2003 we felt like, ‘Man, this is our year.’”

On Nov. 23, 2002, the Green and Gold and Alouettes had met for Canadian football’s holy grail before 62,531 fans at Commonwealth Stadium.

The Green and Gold had 25 first downs to just seven by the Alouettes. They outgained Montreal 417 yards to 300 yards in net offence. They held the ball for 10:30 minutes more than their Eastern foes. But they never led and trailing 18-16 with just 19 seconds left and a chance to tie the game on a two-point conversion attempt, Ray’s pass to Terry Vaughn went incomplete.

“Looking back, it still kind of haunts me a little bit,” Ray says. “I wish I could have made a few more plays in that game and hopefully have a different outcome.” 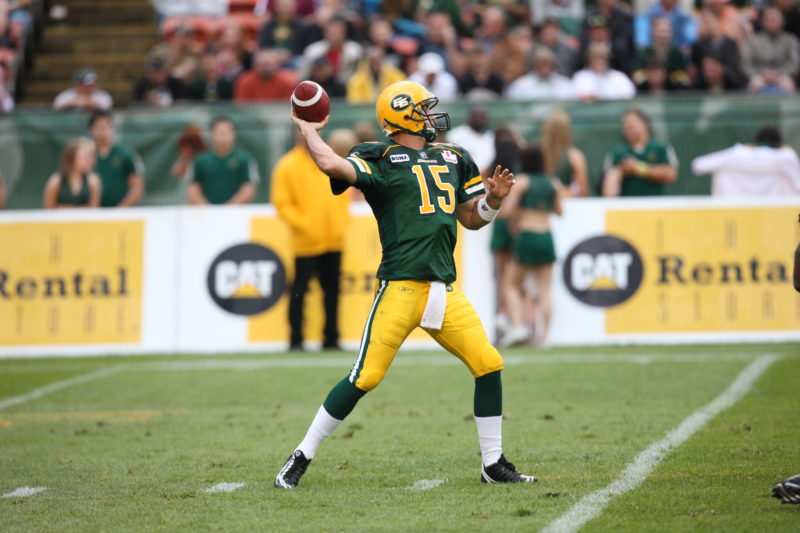 “Any loss leaves a sour taste in your mouth, especially in that game at that stage,” says Jason Tucker, who played wide receiver in Edmonton from 2002 to 2008. “All the work you put in to get to that point, and then you come up short, and all you’ve got now is a whole offseason to think about that. There’s no more football. There’s no more, ‘Ok, I’ve got next week to come back’. That’s it, that’s the last game of the year.

“Now you’ve got to sit on that and stew over that for the whole offseason and you just can’t wait to get the pads back on and say, ‘Ok, we’re not going to let what happened to us the previous year, we’re going to get to the end and finish the deal.’”

Getting Back to the Big Game

Edmonton finished the 2003 regular season atop the CFL West Division standings with a 13-5 record, earning a bye to the West Final where they defeated Saskatchewan 30-23 to advance to the Grey Cup. The Alouettes finished first in the East Division with an identical 13-5 record and punched their ticket to the championship game by defeating the Toronto Argonauts in the East Final.

“It’s like writing a Hollywood script: ‘Give us the Alouettes,’” Higgins says. “If somebody were to say, who would you want to play in the Grey Cup, I can guarantee, 100% would say ‘We want the Alouettes.’”

In a role reversal from the year prior, Edmonton never trailed, leading for nearly 55 minutes of the 60-minute contest. Montreal rallied to pull even on the scoreboard twice, but both times the Double-E answered with a quick score. Sean Fleming’s 27-yard field goal just before the end of the first half to restore Edmonton’s lead, 24-21, proved to be the last points the Green and Gold needed, as they held Montreal to one second half point.

For the first time since 1993, the Grey Cup belonged to the City of Champions. Only one member of Edmonton’s 2003 team, Chris Morris, had previously won a ring with the Green and Gold.

“I didn’t win a championship at any other level. Not a high school championship, not a college championship. 2003 was my first ever championship,” says Tucker, who was named Most Valuable Player of the 90th Grey Cup after hauling in seven receptions for 132 yards and scoring a pair of touchdowns.

“Being named MVP is icing on the cake, because you go there and you want to win the championship and that was the first one that we accomplished as a team,” Tucker says.

“We felt like it was ours to win,” says Ray. “We had so much confidence from the previous years knowing we were so close and we had a good team and we felt like we were good enough to win. Being able to go out and get that done felt like we accomplished what we set out to do.”