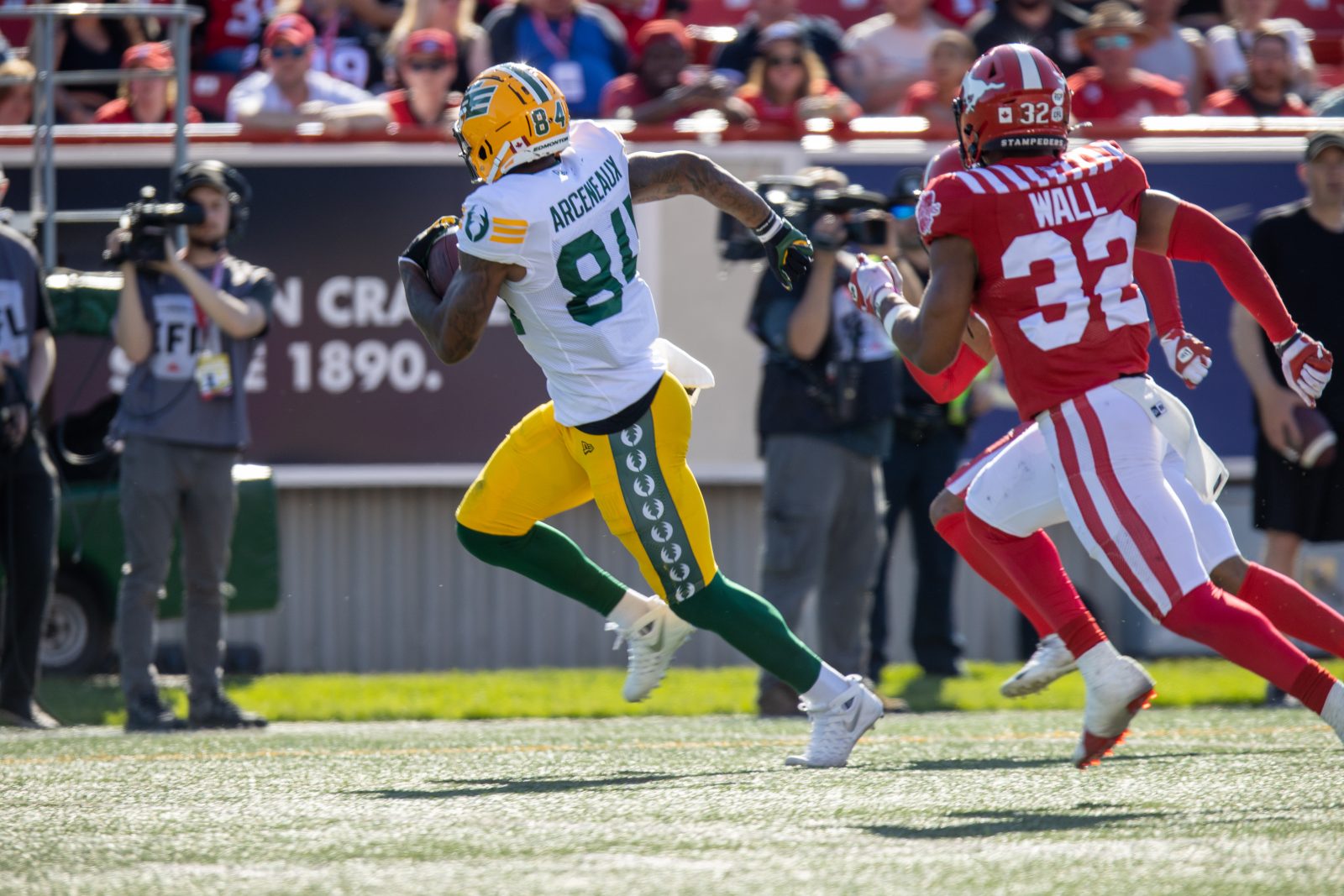 Saturday was the night that any remaining doubt was laid to rest.

Moment of passing: halftime during the Edmonton Elks’ 30-23 loss to the host Calgary Stampeders at McMahon Stadium. 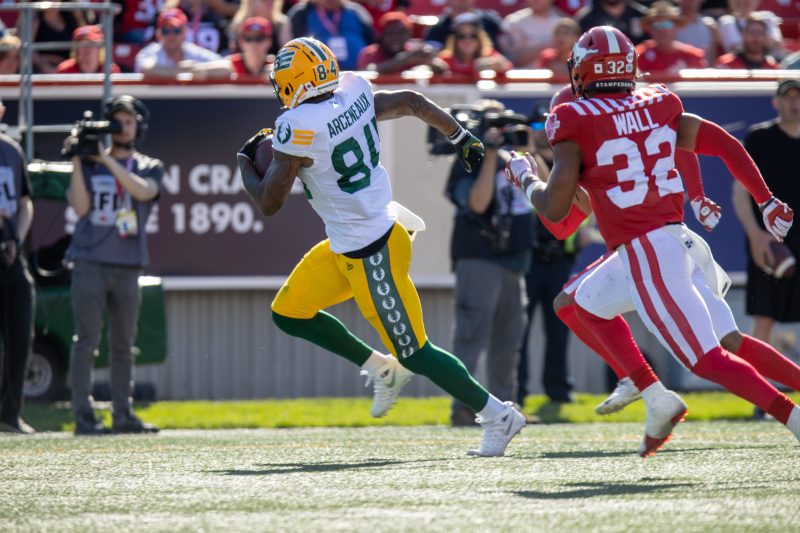 After watching veteran wide receiver Emmanuel Arceneaux blaze down field to score a 33-yard catch and run touchdown for Edmonton in the second quarter, the CFL on TSN studio analysts went before the nation and ate their words.

“I was leery about this signing; I’m not going to lie. I’m like, ‘Why are they bringing back Manny Arceneaux?’”, Canadian Football Hall of Fame receiver Milt Stegall confessed. “But I was wrong.”

“We were all wrong,” added Davis Sanchez, the all-star cornerback who as a member of the B.C. Lions went head-to-head on a regular basis with Arceneaux during practice when the two were teammates in Vancouver in 2010.

Arceneaux, who joined Edmonton as a free agent during the offseason, led all Elks receivers, hauling in seven passes from quarterback Nick Arbuckle for 99 yards on Saturday.

The three-time CFL West Division All-Star’s second quarter score was his first CFL touchdown in 973 days and made him the oldest player (at 34 years, 281 days) in Green and Gold with a receiving touchdown since 2004 when Canadian Football HOFer Mike Pringle (then 37 years and 10 days) had a TD reception for the Double E.

ONE OF CFL’S LEADING RECEIVERS

Through three games, Arceneaux has caught an incredible 12 of 13 targets, and totalled 203 receiving yards. The Louisiana native’s name appears all over the CFL leaderboards, ranking second in catch rate among players with at least 10 receptions (92.3%) and third in total yards after catch (86). He’s tied for first in the league with two 30-plus yard receptions and is responsible for Edmonton’s longest receiving play of the season, 66 yards coming in Week 2 against the Saskatchewan Roughriders.

Back in the CFL for the first time since appearing in 11 games with Saskatchewan in 2019, the veteran of a dozen seasons in pro football is looking better with each week. Along with B.C.’s Dominique Rhymes, Arceneaux was one of only two players to record at least seven catches and 90 receptions yards in Week 3.

“I was blessed with the opportunity,” Arceneaux said Saturday during a post-game interview on 630 CHED, the official radio home of the Edmonton Elks. “That’s why they brought me in here just to make the most of any opportunity that comes my way.

“But it’s about those guys around me, how I can help them be better. Shoutout to the O-line for protection and this organization for believing in me and giving me the opportunity to still play football. So anything that I can do out there, that’s my main focus, whether it’s running, blocking, you name it. That’s what I’m here for; to work.”

FEEL-GOOD STORY OF THE SEASON

The return of Arceneaux, who just last year was in Texas moonlighting as a receiver with the Indoor Football League’s Frisco Fighters while mentoring young athletes at Built 4 It Athletics during the day, has quickly become the feel-good story of the young CFL season. Even Stamps pivot Bo Levi Mitchell, twice named CFL Most Outstanding Player and a two-time Grey Cup MVP, went out of his way to give Arceneaux a shoutout.

“It’s good to see Manny Arceneaux back,” Mitchell said while speaking to TSN’s Sara Orlesky after the game. “That boy’s out there killing it.”

While delivering impactful play on the field, Arceneaux is also providing Edmonton with the leadership-by-example that he is so well respected for across the league. One of his team’s most elder statesmen, the perpetually upbeat Arceneaux believes that Edmonton is heading towards a Canada Day match-up with the Hamilton Tiger-Cats on the verge of its first victory of 2022.

I believe in these guys, we believe in each other, and we know we’re right there,” Arceneaux said during his 630 CHED appearance. “It’s just the ‘Next Game’ mentality. Proper preparation prevents poor performance and we’re going to get back to work and get ready to play the Hamilton Ti-Cats.”