In her job with World Wrestling Entertainment, Thomas Costigan’s girlfriend is quite familiar with championship belts.

But the data analyst for WWE has never seen a belt quite like the Joey Moss Award.

Named for the beloved Green and Gold locker room attendant who made everyone smile with his infectious zest for life, the Joey Moss Award is presented annually at the end of training camp to an Edmonton Elks player who’s persevered through adversity and embodies Moss’s positivity in everything he does.

Costigan, a second-year defensive lineman, was awarded the belt this week as the Elks began preparation for their season-opening game against the B.C. Lions in Vancouver on Saturday. 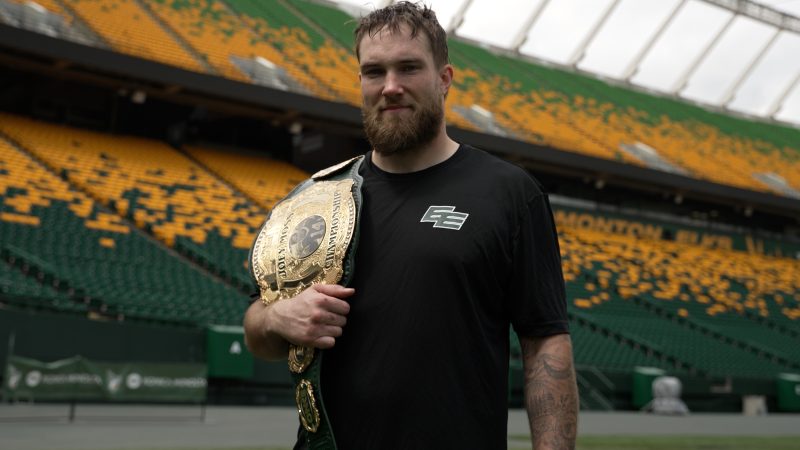 “It’s awesome. Honestly, I wasn’t expecting it” a visibly touched Costigan said as he gazed at the belt adorned with an image of Moss. “Hearing who (Moss) was and so many people talk about the kindness that he had in his heart means a lot to me and I’m glad the coaches saw me as a person to give this to.”

Moss was a mainstay at EE training camp dating back to 1986 when he was introduced to the club. The idea to honour Moss came from Elks Director of Football Operations Kris Hagerman, who witnessed firsthand the impact Moss had around training camp.

O’Donnell “was able to give his perspective basically on who Joey Moss was and what he meant to this city, and I honestly thought that was a very heartfelt message and the locker room felt that, so I think we all got a taste of who he was and how he was a person,” Costigan says.

As a rookie last season, Costigan appeared in 11 games for the Elks, recording 24 defensive tackles and six sacks. He saw action in both 2022 pre-season games, recording a defensive tackle in each Edmonton’s 30-20 win over the Winnipeg Blue Bombers and 37-7 loss to the Calgary Stampeders.

The 24-year-old from Stamford, Conn., says he felt much more comfortable in his second training camp with the Elks.

“It was a lot more stressful last year, this year I’ve just been able to trust myself,” Costigan says. “Last year I was fifth string coming into camp, it’s stressful, you see a lot of guys get cut and you’ve got to make the most out of every opportunity, so coming in this season I knew I was going to get my fair opportunity and I’ve made the most of it so far.”

Costigan is the second winner of the Joey Moss Award, following inaugural recipient Jonathan Rose in 2021.

A pro wrestling superfan, Moss would certainly approve of this year’s winner. Moss even had his very own title belt given to him by his hero, legendary WWE champion Hulk Hogan. And now Costigan has the championship honouring a real-life Edmonton hero.

“I never held a belt like this before,” Costigan says. “This is amazing.”