On Monday, the Edmonton Elks welcomed the Fort McKay Northern Spirits to The Brick Field at Commonwealth Stadium, where the senior girls tackle football team toured the facilities, were able to go out on the field, as well meet some players and coaches.

While hopefully the experience helped give inspiration to the players, it was truly everyone with the Elks organization that had a chance to meet the Northern Spirits that came away most inspired. 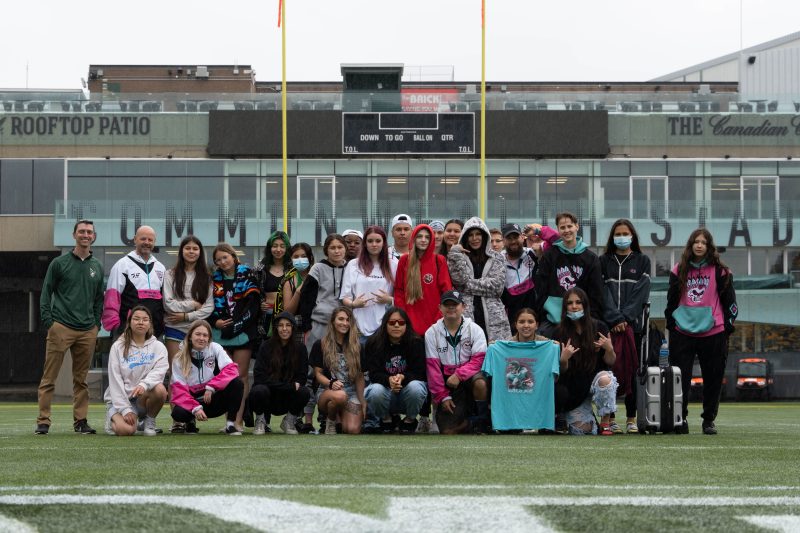 “In 2019 none of these girls had ever played football,” says head coach Dylan Elias. “Most of them hadn’t even played a team sport before. So, from the 2019 season then to the 2020 season then to this season, it’s just night and day. It’s unreal how much they’re improved. “

Each game means a round trip of more than 1,000 kilometres for the team from Fort McKay in northeast Alberta to the Capital Region. Representing Fort McKay First Nation is essential for the players, who came up with the team name and designed its unform, which features every individual’s Cree language name on the back and the community name on the front.

“These things are so important to them so that when they walk out there, they feel that pride,” Elias says. “We smudge before every game, so there’s a lot of culture integrated into the game and the routines, and I think they’re just proud to be positive stories of Indigenous women.”

The Northern Spirits have become a tremendous source of pride in their community of 500 residents, who are Cree and Dene heritage. Each time Elias orders new team gear, the requests come from everywhere, from the players’ parents to the chief and council.

“This season everyone’s very behind us and cheering us on and they’re watching it,” says linebacker Alicia Glaude. “It feels good to have that support from the community.”

Glaude is a shining example of the Northern Spirits. She has been with the team from the beginning, but at first just as a photographer and to handle social media. Glaude didn’t even play until one game that the Spirits were running low on players, and she was called into action. Now she’s been a team MVP and is in position to become the Northern Spirits’ first player on Team Alberta, this summer.

“When we started this whole thing, it was just, ‘Hey, let’s get kids active, let’s get kids playing football, because it’s the ultimate team sport,” Elias says. “… So that was kind of how it started and the kids just loved it and loved it more and this is what it turned into.”