Tre Ford provided a bright spot for the Edmonton Elks in their 37-7 preseason loss to the Calgary Stampeders at The Brick Field at Commonwealth Stadium on Friday night.

After completing just one of three pass attempts, for 17 yards, in Edmonton’s 30-20 preseason-opening road victory over the Winnipeg Blue Bombers on May 27, the rookie quarterback had 79 yards on seven-for-14 passing against Calgary.

“Today was definitely a lot better for me compared to last week,” said Ford, the 8th overall selection in the 2022 CFL Draft. “The game slowed down a bit for me today, which was nice, I took more control of the huddle and when they did send their pressures I was able to get the ball out quick, get some short completions that turned out for a few yards and that’s when they started to drop back a bit more … so today was definitely better for me, but we fell short today so (the game was) not fantastic.” 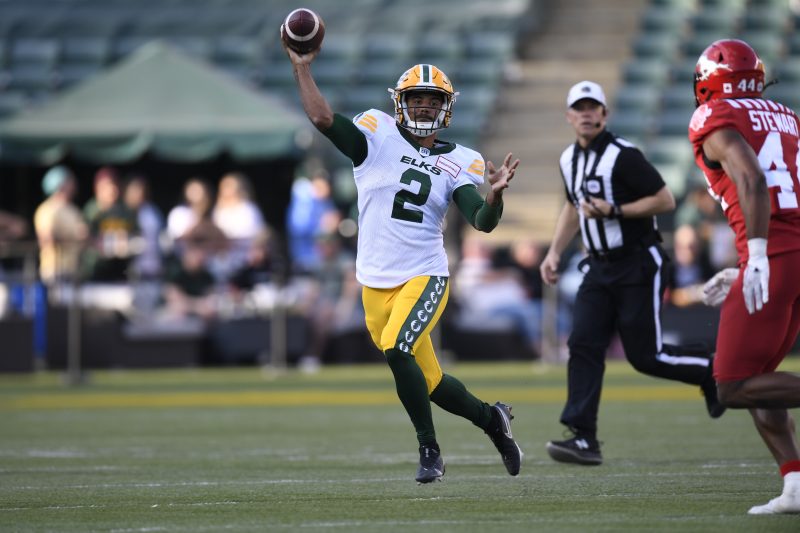 Edmonton Elks rookie quarterback Tre Ford attempts a pass against the Calgary Stampeders at The Brick Field at Commonwealth Stadium on June 3.

As he has demonstrated all training camp, and showed against the Blue Bombers, the super-fast Ford makes things happen with his feet. For the second straight week, Ford was Edmonton’s top gainer on the ground, rushing for 40 yards on three carries. The University of Waterloo product totalled 87 yards on eight carries over Edmonton’s two preseason contests.

“He’s so dynamic because he’s so athletic,” said Elks coach and general manager Chris Jones. “When it breaks down, that’s when the play can begin for Tre.

“We’ve had trouble all camp hemming him up and keeping him in the pocket, and then just about the time you think you have him hemmed up, he’s fast enough to break off a 30- or 40-yard run. He’s got a bright future and he’s willing to play anywhere we put him and I’m really excited about him.”

Ford’s next action will be his first in the regular season as a pro. Edmonton kicks off its 2022 campaign with a visit to the B.C. Lions, on June 11.

“I am the new guy, the rookie coming into the CFL, and there’s definitely a lot for me to learn,” says Ford, 2021 winner of the Hec Creighton Trophy as the most outstanding player in U Sports.

“Even some things out there on the field today I missed, and I just think (having) more development and timing with my receivers, I can actually get through and make those reads, so I just feel I’m going to progress and keep getting better as I’m here.”