Energy is always high for the Battle of Alberta but will be especially so Friday when the Edmonton Elks host the Calgary Stampeders on Stand With Ukraine night on at The Brick Field at Commonwealth Stadium.

In what is perhaps the most significant preseason game in their franchise history, the Elks are supporting a cause that hits close to home for so many Edmontonians. All single game tickets for Friday are just $15, with net proceeds going to the Canada-Ukraine Foundation.

Amid these meaningful moments, the newest member of the Elks, linebacker Brady Sheldon, is set to make his first appearance in Green and Gold. 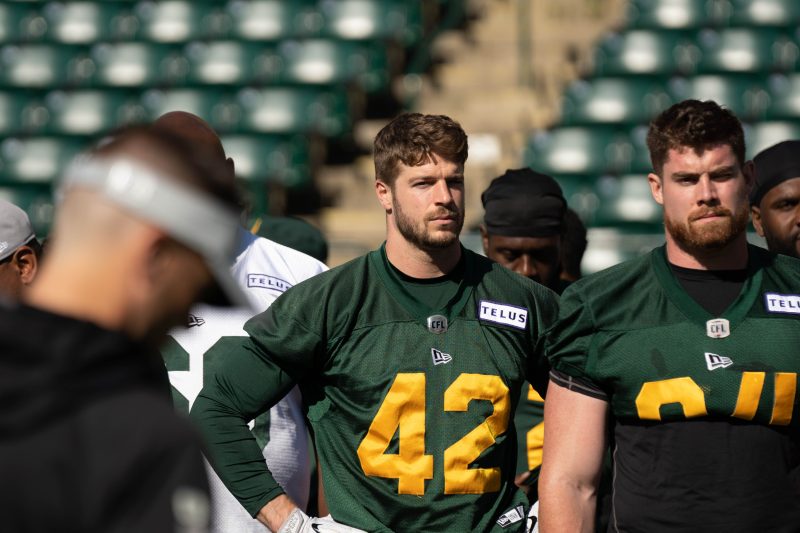 Sheldon, who just signed with Edmonton on Tuesday, is used to debuting on special occasions: Take for example the first time the former Oakland Raiders special-team member suited up during the NFL regular season.

“My first game was Monday Night Football, Christmas of 2017,” the Michigan native recalls. “Christmas day against the Eagles. it was like 23 degrees (Fahrenheit) and my family drove on out from Michigan and came and watched me.”

After four years (2017 -2021) with five teams (Oakland, Cleveland Browns, Cincinnati Bengals, Green Bay Packers, New York Jets) in the NFL, spending much of the time on practice rosters and seeing action in a total of five regular season games, the 29-year-old Sheldon has shifted focus to carving out a spot in the CFL.

“I really enjoy the special teams aspect of it, I like the different rules, and I’m looking to have a career here in Canada,” says Sheldon.

“I like the CFL,” the six-foot-five, 230-pound athlete says. “I think anything that has to do with running suits me. especially with the new (hash marks, moved from 17 to nine yards apart). I think that will benefit me as I can utilize my length and my speed with the new field. I like it, it’s similar to the NFL, and that’s where I was coming from, so I’m excited about it.”

Sheldon has played just one game in the CFL, with the Toronto Argonauts at the end of last season when current Edmonton head coach and general manager Chris Jones was serving as a defensive consultant for the Argos.

“Coach Jones called me and asked if I wanted to play some ball in Canada, and it had been too long (since last playing in a game), it was in the middle of football season and I was just itching to get some ball in, so I didn’t hesitate.”

Coincidentally, his CFL debut came against the Elks, at BMO Field in Toronto on Nov. 16, 2021, when Sheldon had three defensive tackles in the Argos’ 13-7 loss. He made an impression on Jones, who moved quickly to sign Sheldon when the American linebacker was released by the Argos a few days ago.

“I feel like I left Toronto healthy,” says Sheldon. “I felt good, felt like I was playing fast, so I’m glad somebody picked me up because I’m in good football shape right now and ready to go.”

Tickets for the Elks Stand With Ukraine game are available now.