The Edmonton Elks opened the 2022 CFL preseason defeating the two-time defending champion Winnipeg Blue Bombers 30-20 at IG Field on Friday, making a winner out of head coach and general manager Chris Jones in his return to the EE sidelines for the first time since guiding Edmonton to victory in the 2015 Grey Cup.

“It was a lot of emotion being back over here in Winnipeg,” Jones said in a post-game interview on 630 CHED. “There’s been some big games here over the years, and just seeing these guys get to play, I had the best seat in the house, seeing some of the guys we scouted, some of the guys we signed in free-agency and some of the guys we kept off last year’s team, it was just a good mix of watching them play.”

Ka’Ron Ashley, Taylor Cornelius, Caleb Holley each had a touchdown for the Elks, and Edmonton kicker Gregory Hutchins was a perfect three-for-three on field goal attempts. The Elks dominated in total offence, 455 to 292 yards, and won the turnover battle 3-1.

Jones got a good look at quarterbacks Nick Arbuckle, Cornelius, Tre Ford, and Kai Locksley, as all four pivots each got at least two series under centre. Arbuckle went nine-for-10 for 145 yards and two touchdowns passing, while Locksley completed nine of 11 attempts for 85 yards. Ford, the eighth overall pick in the 2022 CFL Draft, was just one-for-three passing but led the Elks with 47 yards rushing in his pro debut. 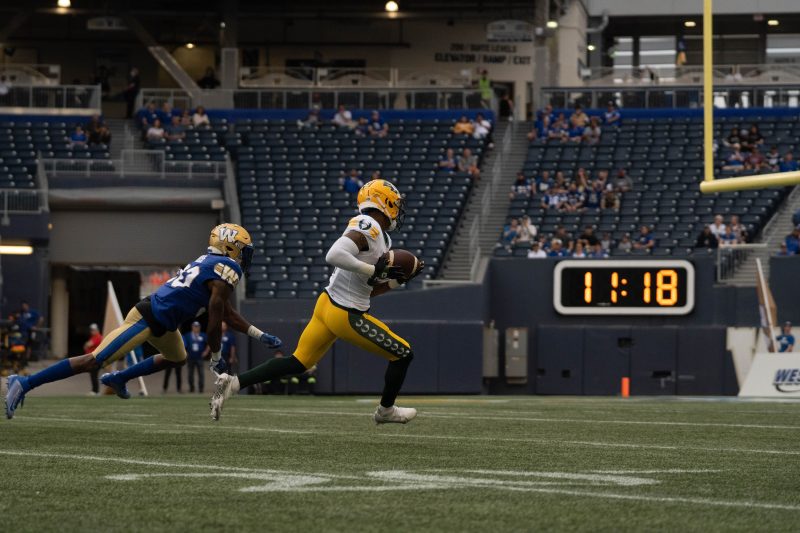 Caleb Holley scores a 58-yard touchdown for the Elks.

The Elks scored on their first possession, taking an early 7-0 lead when Arbuckle connected with Holley on a 58-yard touchdown and Hutchins tacked on the extra point. Hutchins then added to the Edmonton lead, booting a 44-yard field goal midway through the opening quarter. Dalton Schoen got Winnipeg on the board, scoring a two-yard touchdown on a pass from Dru Brown with 2:01 remaining in the quarter. Ali Mourtada’s kicked the point after, and Edmonton held a 10-7 lead through 15 minutes.

The teams swapped touchdowns in the second quarter. Edmonton extended its lead to 17-7 after Cornelius scored a touchdown from the one-yard line on a QB-keeper, before pivot Dakota Prukop responded with a touchdown of his own, running eight yards to paydirt, cutting Edmonton’s advantage to 17-14 going into halftime.

Winnipeg it took its first lead, 20-17, early in the second half when Brown plunged two yards into the endzone. The Elks answered on the ensuing possession, as Arbuckle engineered a six-play, 74-yard drive that culminated in a three-yard touchdown toss to rookie receiver Ashley. Edmonton led 24-20 after three quarters.

Hutchins kicked his second field-goal of the night, from 15 yards, with 5:44 left in the game to put the Elks in front by a converted touchdown, 27-20. Winnipeg’s comeback bid was snuffed out when Elks defensive back Scott Hutter picked off Prukop at the Edmonton seven, and Locksley led Edmonton on a drive that ran the clock down to 30 seconds when Hutchins hit from 24 yards.

Edmonton will wrap up its preseason schedule when the Elks host the Calgary Stampeders on Stand With Ukraine night at The Brick Field at Commonwealth Stadium on June 3 (7 p.m. MDT). All single-game tickets are just $15 available through Ticketmaster.

“We have a good six or seven days of evaluation of all the players in this room, including myself and the quarterbacks and at every position,” Arbuckle said on 630 CHED, “So I’m sure we’re going to be in for a lot of competition and hard practices and a great preseason game to wrap it all up.”