WR Ashley’s First Trip to Canada Could Last a While

WR Ashley’s First Trip to Canada Could Last a While

The call came on Sunday.

On Monday, he got his passport expedited.

He arrived on Wednesday, and was signed by Thursday.

And now that he’s spent a few days in Canada, Ka’Ron Ashley hopes to stay a lot longer.

“It’s my first time out of the United States, so it’s definitely a blessing,” says the 23-year-old Floridian. “Soaking it all up, soaking it all in.”

The last week has been a whirlwind for Ashley since he received invite to Edmonton Elks training camp at The Brick Field at Commonwealth Stadium, where the former West Florida University Argonauts standout is among a host of wide receivers competing for roster spots. 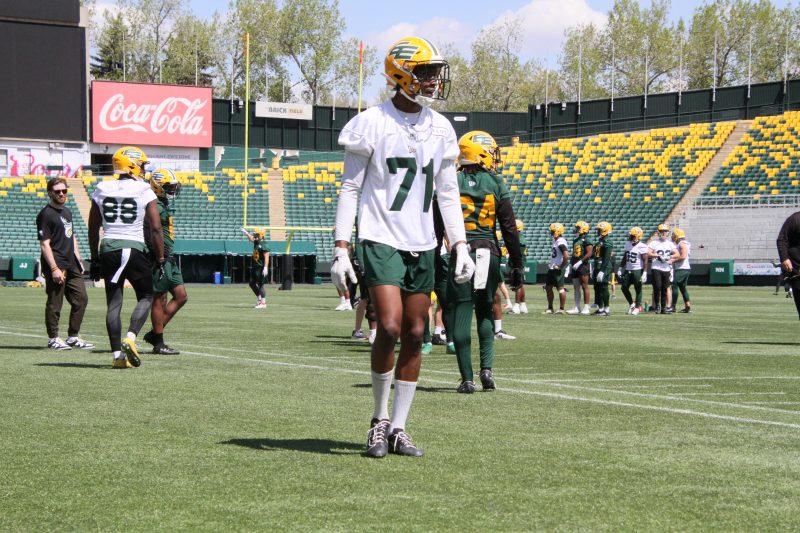 While Ashley wasn’t much familiar with the Canadian game, the honour roll student (4.0 GPA) is a quick study. At six-foot-three and 165 pounds, he’s looked right at home on the CFL’s larger playing surface, making some nice grabs during reps in practice.

“I’m a lighter guy, so with more field, there’s more space, more opportunity to make guys miss, so I definitely think it suits me very well,” says the wiry athlete with deceptive quickness.

“I feel like I’m a very fast guy. My 40(-yard) time probably won’t say it, but game speed and when you (watch) the film, you’ll definitely see it.”

Ashley wrapped up a record-setting collegiate career last season, when the senior wideout was a 2021 Second Team All-Gulf South Conference selection after he hauled in 47 passes for 677 yards and led his team with 12 touchdown receptions, becoming West Florida’s all-time leader with 24 TD catches. As a junior he scored a major to help UWF win the 2019 NCAA Division II football championship game, 48-40 over Minnesota State.

Last month, the Jacksonville, Fla., resident attended an open tryout in Tampa, Fla., where he made an impression on Elks head coach and general manager Chris Jones.

“They told they initially weren’t going to bring me in, but they said they were going to keep an eye out for me and I got the call about a week later, and hey, I’m here,” Ashley says.

While he’s brand new to Canada, Ashley sees a few familiar faces in Edmonton, including former UWF quarterback Mike Beaudry, who connected with Ashley for six touchdowns in 2017, when Western Florida reached the Division II championship game, losing to Texas A&M-Commerce. There are also old rivals, like fellow wide receiver Christian Saulsberry from the University of West Alabama in the Gulf South Conference.