But after COVID-19 turned the world upside down, it’s an award he more than deserved.

The two men helped lay the foundation for a successful 2021 CFL season, which culminated with a thrilling Grey Cup game more than two years in the making. All told, the award signified a collective win for the league’s medical community. 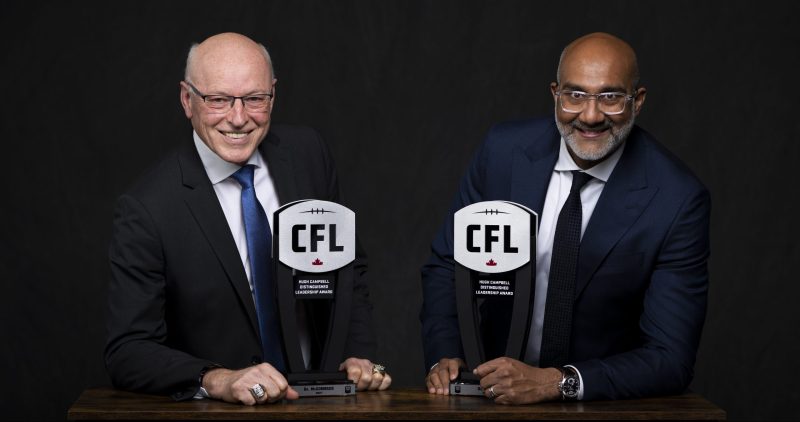 “Just to be recognized medically is great. In professional sports leagues, that doesn’t happen very much, whether it’s docs, therapists, or equipment managers,” Naidu pointed out.

Earning the award—which is named after long-time Double E coach, manager and president Hugh Campbell—was an acknowledgement of all the hard work that went into a season that taxed team staff across the league like never before.

“The amount of work that the athletic therapists and the equipment managers had to do with cleaning the rooms, all the testing, changing schedules on the fly—it basically more than doubled their workload,” Naidu explained.

“I can attest to that with both the NHL and the CFL. And with our [Elks] staff, we had turnover and we had new people in our locker room who did such an amazing job.”

Led by Brian Cheeseman (Director of Sports Medicine and Rehabilitation) and his staff of Kellen Antoniuk, Erin McGoldrick, and Lisa Swallow—along with equipment manager Dan Rosnau and assistant Braden Spong—it took lots of heavy lifting to create an environment for successful protocols.

And before those protocols could be implemented in 2021, they had to be crafted by Naidu, McCormack, and the rest of the CFL’s medical committee.

That work started long before the season kicked off last August.

“It was actually in 2020, because we planned a bubble in Winnipeg for the CFL to play,” Naidu said, reflecting on the CFL’s near hub in the Manitoba capital.

“That was a lot of time in the summer and spring of 2020. When that season was officially cancelled, we started again [on drafting protocols] in late 2020 and January 2021, starting to work on the protocols and redo them.”

It was a process that pushed Naidu professionally, as he expanded his medical understanding into areas far beyond his core focus of sport medicine.

“I’m talking to a lot of my other colleagues in medicine and I’ve said ‘I never thought I’d know so much about PCR testing, CT values…and working so closely with infectious disease specialists,’” said Naidu, who’s leaned on his colleagues at the University of Alberta, including Dr. Stephanie Smith.

Now Naidu, who is also the head team physician for the Edmonton Oilers, is one of the foremost experts on playing sport in a COVID environment after helping guide the NHL’s Edmonton bubble in 2020, the WHL’s re-launch in 2020, and of course the CFL’s liftoff in 2021.

“It’s quite interesting because you never really look at yourself as an expert sometimes, you just work. But I mean, when I talk to some of my colleagues who are planning things in other provinces, they’re saying ‘hey, how would you do this?’ It’s just become second nature, because you’re working on it for different sports and leagues,” Naidu explained.

And while we collectively can’t wait for COVID’s biggest impacts to be a thing of the past, Naidu knows that even if the 2022 CFL season may not be entirely normal, it’s reassuring to know that there’s a growing template for both pro and amateur sport to safely take the field.

“We kind of lose the kids in all of this,” Naidu pointed out. “It’s so important for kids. They have to move – it improves their mental health and it improves their learning, so by having pro sports going, it continues to drive youth sports.”

“Pro sports is really an example that if they’re going safely, youth sports can continue to go, which is good for our kids.”