Pay it Forward with Football using 50/50 for good 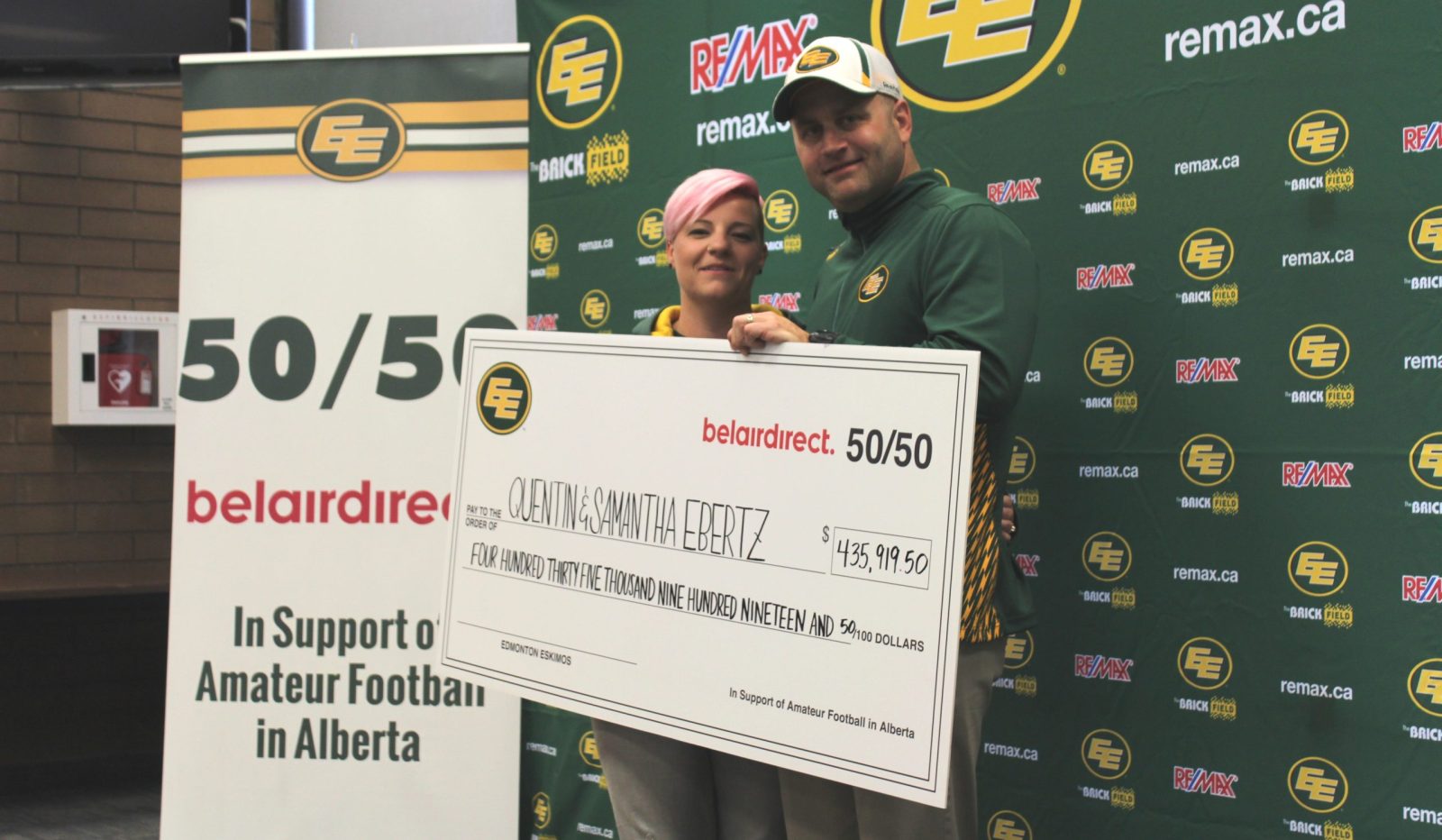 Pay it Forward with Football using 50/50 for good

By the time Friday night shifts to Saturday morning, another lucky Elks fan will have a big cheque to cash.

The biggest prize of the season will be up for grabs at The Brick Field at Commonwealth Stadium, as the Elks cap off their 2021 home schedule against the Saskatchewan Roughriders with more than $106,000 in the total pot for the 50/50 sponsored by James H. Brown Injury Lawyers, thanks to an unclaimed prize from October 15.

It’ll be the latest on a list of some big 50/50 carryovers for the Green and Gold.

Now, someone else will add their name to the list of carry over winners and the positive change that comes with it.

For the Ebertzs, the win has certainly been life changing. 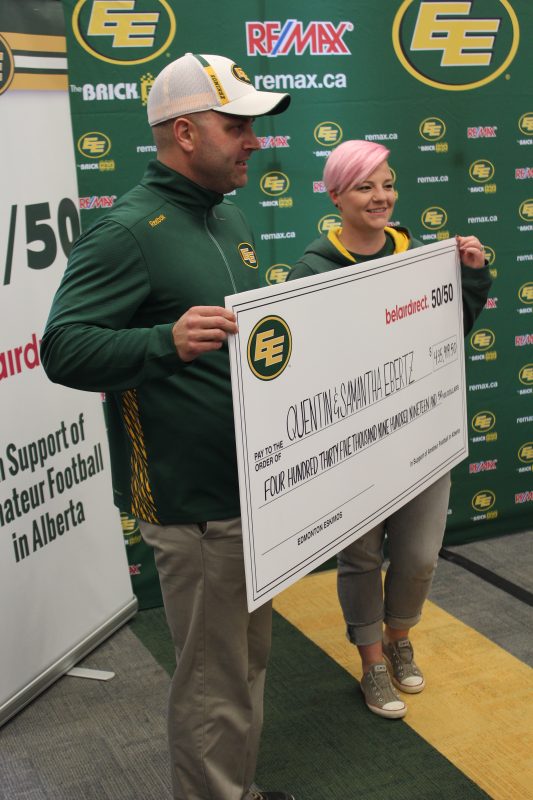 The pair of football fans, whose relationship has been intertwined with Green and Gold games even before they became season seat holders since 2005, have done plenty with their windfall.

Sure, there was paying down some debt, replacing an old car, and saving for a new home, but perhaps the thing that has brought the biggest smiles to their faces has been the creation of Pay it Forward with Football.

“We have an incredible story that’s been written through the team and through football and we needed to start doing something to give some of that back,” explained Quentin, who proposed to Samantha with the help of Fred Stamps the week of the Labour Day Rematch back in 2011.

“We’ve always believed in kindness and spreading kindness. We feel strongly that kindness is something that everyone deserves, so we came up with the idea of Pay it Forward With Football to tie the two together.”

Created in 2019, Pay it Forward With Football gives back in several ways, including spreading the joy of attending an Elks game.

Admittedly, going to games is something that Ebertz knows can be taken for granted by season seat holders (including himself), but for many it can be so much more than a trip to a game.

“When we first started this, we honestly didn’t know what we would get for nominations,” Ebertz explained. “I don’t think we were really prepared for the gut-wrenching life stories that we receive. People dealing with financial loss and deaths in the family.”

The story of a mother and her two young sons who had just lost their husband and father respectively stands out for Ebertz.

“When I went to go deliver her tickets, she invited me into her home,” Ebertz recalls. “This was maybe a month after her husband passed away and so I wasn’t sure to be honest with you what I was walking into when I went into the house.”

“She welcomed me with open arms, we probably talked for about a good hour about her life and her family, and her two sons who were seven and nine at the time.”

What ensued was an emotional visit to a practice even before attending the game.

“We sat there and watched practice and after we went out on the field. Just watching the team sort of embrace the family, it was…sorry, I get emotional talking about it,” Ebertz said, with a pause. “The boys were missing their father figure and just to see the team embrace them…it was a pretty cool moment, for sure.”

The most dedicated of football fans, Quentin and Sam have passed down their love of attending games to their six-year-old son Tenneson (and once game times aren’t past bedtime, their three-year-old daughter Rylie).

Pay It Forward has become a family affair, with Tenneson proudly telling anyone who will listen about his parent’s worthwhile cause.

And as far as Friday night, Pay it Forward With Football will send another deserving family to soak in a night to just get away and enjoy the experience. Not to mention, every 50/50 winner this season has been in-stadium to claim their prize.

“If you just take a second to sit in your seat and look around and for lack of a better term, breathe it all in…you can hear a cowbell three rows behind you and then look over a section and see a kid playing a vuvuzela,” Ebertz described of sitting in the stands.

“You don’t get that sort of atmosphere at home. It’s in people’s best interest to come and just experience the atmosphere for themselves and really appreciate the game for what it is. It’s professional football and we have it here in our backyard and we’re fortunate to have it here and you only get so many opportunities per year to do that.”

Christmas is fast approaching and we want to do our part. If you can help in anyway, please do so. Let’s keep the ripple of kindness moving this holiday season! 🎅 #P4WFB #stuffawallet https://t.co/ibCwJSvuvf pic.twitter.com/hqEUxYvKPm

Pay it Forward With Football is about more than just Elks games. You can learn more about the organization, which is a registered charity, by clicking here. They’re currently taking nominations for their Stuff A Wallet campaign, which will give cash and gift cards to a deserving family this holiday season. To learn more, click here.