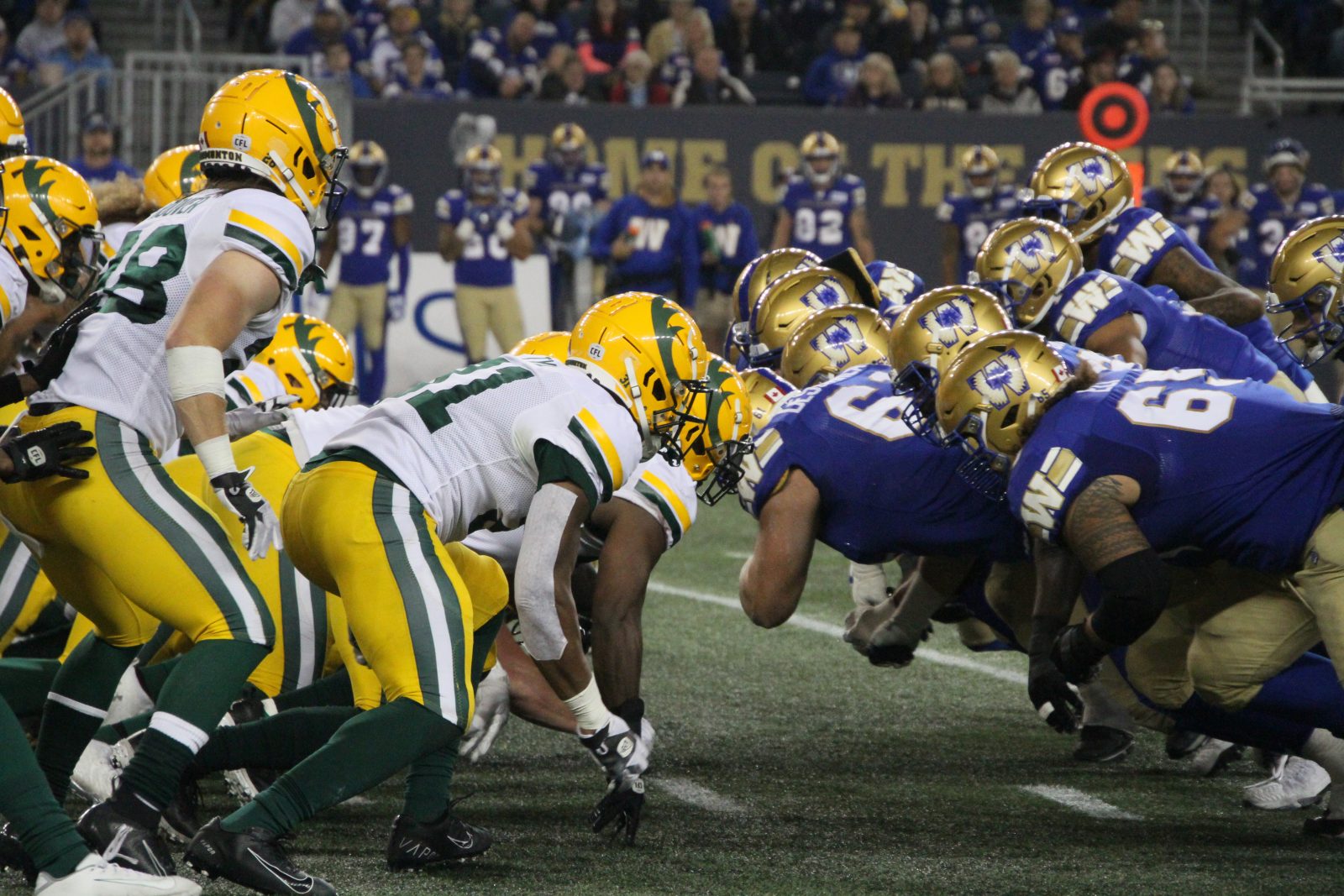 WINNIPEG – The defence bent and didn’t break until late.

But the offence couldn’t muster much of anything Friday night, as the Edmonton Elks fell 30-3 to the CFL-leading Winnipeg Blue Bombers at IG Field.

By the time the dust had settled, Winnipeg extended their CFL-best winning streak to six, while the Elks dropped their fourth consecutive game.

It was a game Edmonton hung around in thanks entirely to their defence.

Despite the time of possession battle finishing 36:39 to 23:21 in favour of the Bombers, Edmonton’s D posted a gritty effort that had the Elks down just 11-3 at the half.

The strong defensive outing from the Elks  started on Winnipeg’s first possession, as defensive co-ordinator Noel Thorpe’s unit stopped the Bombers three times on the one yard line.

After falling behind 11-0, Edmonton’s defence did it again 4:06 into the second quarter, as safety Jordan Hoover made a tremendous interception in the Elks end zone.

Hoover’s big play, which included a 70-yard return, took points off the board for Winnipeg and set Edmonton up for their only points of the game courtesy a Sean Whyte 32-yarder.

It was more of the same in the second half, as Edmonton’s offence struggled to the move ball in QB Trevor Harris’ return to the lineup. The Elks finished with just 196 yards of offence and 11 first downs. 87 of those offensive yards came through the air from Harris, while 47 passing yards came from Taylor Cornelius, who saw some fourth quarter action.

Winnipeg, meanwhile, struggled to score for much of the game as well, but eventually broke out in the fourth quarter. The Bombers finally wore down an Edmonton unit that spent more than 20 minutes on the field in the first half alone.

Nic Demski scored Winnipeg’s lone major in the opening 30 minutes on a 16-yard pass from Zach Collaros. On the ground, Andrew Harris found the end zone on a 13-yard scamper near the midway point of the fourth quarter, before adding another major late for good measure.

Harris’ first touchdown of the game, which made it 23-3 for the Bombers, ended any hope of an Elks comeback, as the club fell to 2-6. Winnipeg improved their record to 8-1 in front of more than 27,000 fans.

Andrew Harris wasn’t stopping until he got in the end zone!! 💪 pic.twitter.com/O6aD8dOPmQ

The Elks defence did their best, but the Bombers finally put it away in the fourth quarter thanks to Harris’ first TD of the night.

Until that point, the game remained within striking distance thanks to Edmonton’s stout defence, along with some Winnipeg kicking game woes.

The Bombers Ali Mourtada missed three kicks on the night, leaving points on the table that kept Edmonton in it. But those misses proved inconsequential in the end result, as Harris sealed the game with his two majors and 150 rushing yards.

The Elks come up with the pick in the end zone and get a nice return! pic.twitter.com/Mq83vyoGts

Jordan Hoover had a strong night for Edmonton, leading the team in tackles (9 defensive and 1 special teams), while also posting his third career interception.

Hoover’s pick in the second quarter was really the only highlight of the night for the Elks, as his 70-yard return after the diving catch set the table for Edmonton’s lone points of the night.

Edmonton and Winnipeg will do it again in a week’s time, as the Bombers head to The Brick Field at Commonwealth Stadium on Friday, October 15 at 7:00 p.m. MT.

You can get your tickets for the game, which will feature a halftime performance by Hanson, by clicking here.