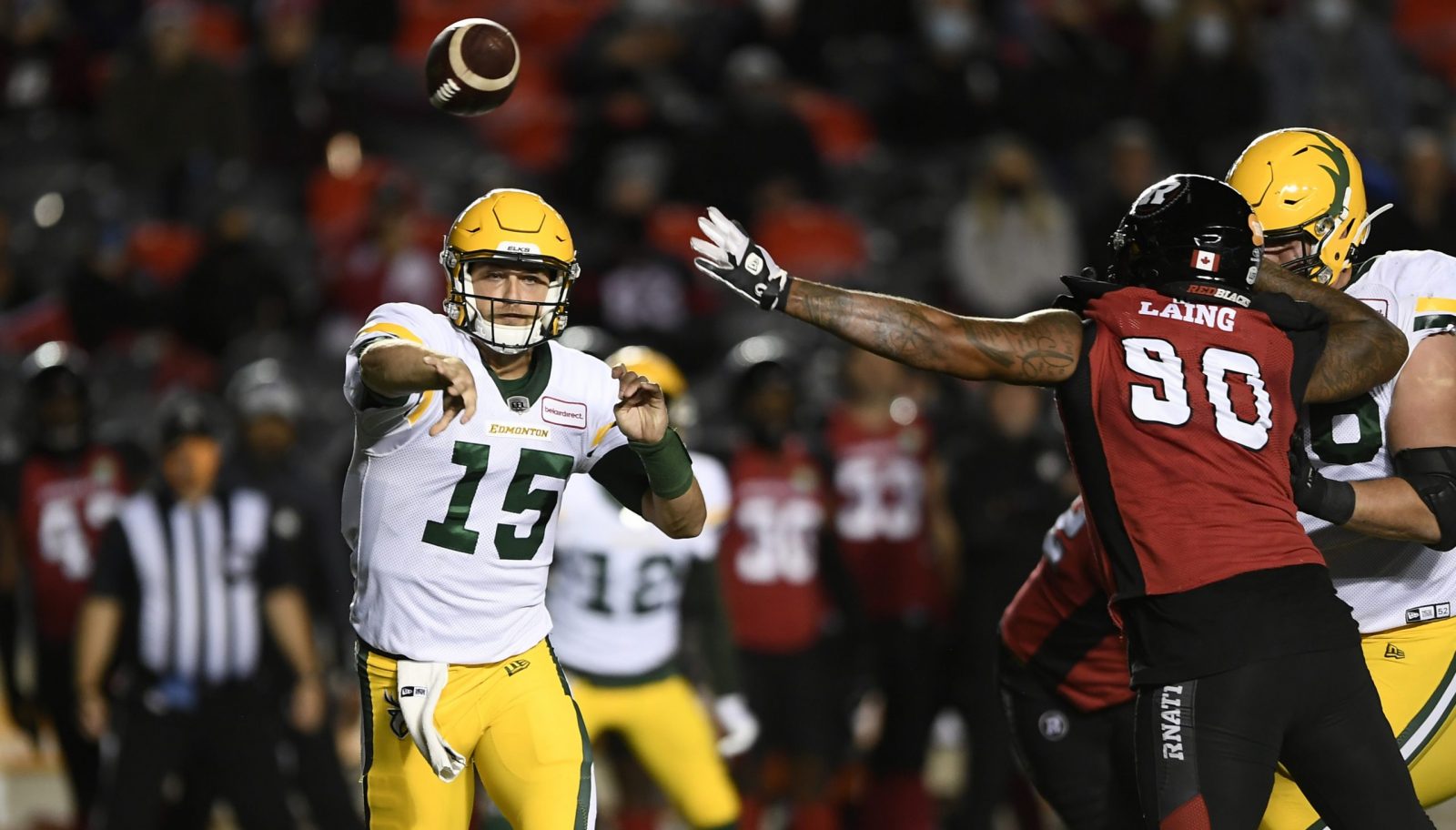 OTTAWA – After spotting the Ottawa RedBlacks an early 14-0 lead, the Edmonton Elks couldn’t come back Tuesday night at TD Place, as the Green and Gold fell 34-24 in the nation’s capital.

The RedBlacks scored touchdowns on their first two drives of the night, taking a healthy lead less than five minutes into the game, as rookie quarterback Caleb Evans led his team to a win in his CFL debut.

Despite 334 passing yards and three touchdowns from Elks quarterback Taylor Cornelius, it proved to be Ottawa’s night thanks in large part to some big returns and key Edmonton turnovers, as the Elks dropped to 2-5 on the season.

Down 17-7 at the half, Edmonton and Ottawa traded points in the final 30 minutes, including third quarter touchdowns in the form of a 73-yard punt return from the RedBlacks Devonte Dedmon and an 18-yard Greg Ellingson TD.

The fourth quarter was more of the same, as Ottawa and Edmonton continued the trend of exchanging second half blows.

Former Elk Kenny Stafford doubled up the score to 34-17, before Shai Ross cut the lead to 10 with just 2:39 on the clock.

Ross’ fourth quarter major, which was his second of the night after a 77-yarder late in the first half, proved to be the final points of the evening, as Ottawa improved to 2-5.

After getting the ball to start the second half, Edmonton’s offence couldn’t take advantage of some momentum heading into the half following Ross’ touchdown late in the second quarter, and were forced to punt.

That proved costly for the Elks, who watched as Devonte Dedmon ran Hugh O’Neill’s kick back 73 yards for the touchdown. It was the second punt return TD against for the Green and Gold this season and Dedmon’s third lengthy return of the night after 32 and 42 yarders earlier.

The score built the Ottawa lead up to 17 and forced the Elks to play more catch up.

Ellingson has had plenty of big games in Ottawa, and Tuesday night was no different.

The veteran receiver caught a game-high seven passes, and led the contest as the lone player over the 100-yard mark.

The former RedBlack scored a touchdown 9:45 into the third quarter, answering back after Ottawa had scored their punt return TD.

It was a breakout performance for second-year receiver Shai Ross.

The University of Manitoba product breathed life into an otherwise one-sided first half when he scored a 77-yard TD on the Elks’ longest play of the season late in the second quarter. A backflip after the major seemed, at least momentarily, to be the symbolic flipping of a switch for the Elks in their comeback bid.

Ross added a second major late in the fourth, which cut Ottawa’s lead to 10, but was too little too late.

There was plenty of good for Cornelius in his second CFL start, throwing for more than 330 yards and a trio of touchdowns.

His first career CFL touchdown to Ross on a deep ball in the first half was one of the bright spots for Edmonton, along with his second of the night to Ross, which was a long distance shovel pass.

The Elks have a longer than usual gap between games, as next on the schedule is a road matchup the Winnipeg Blue Bombers on Friday, October 8. Edmonton’s trip to the Manitoba capital will be the club’s fourth road game of the season, before the Green and Gold return for a three-game homestand.