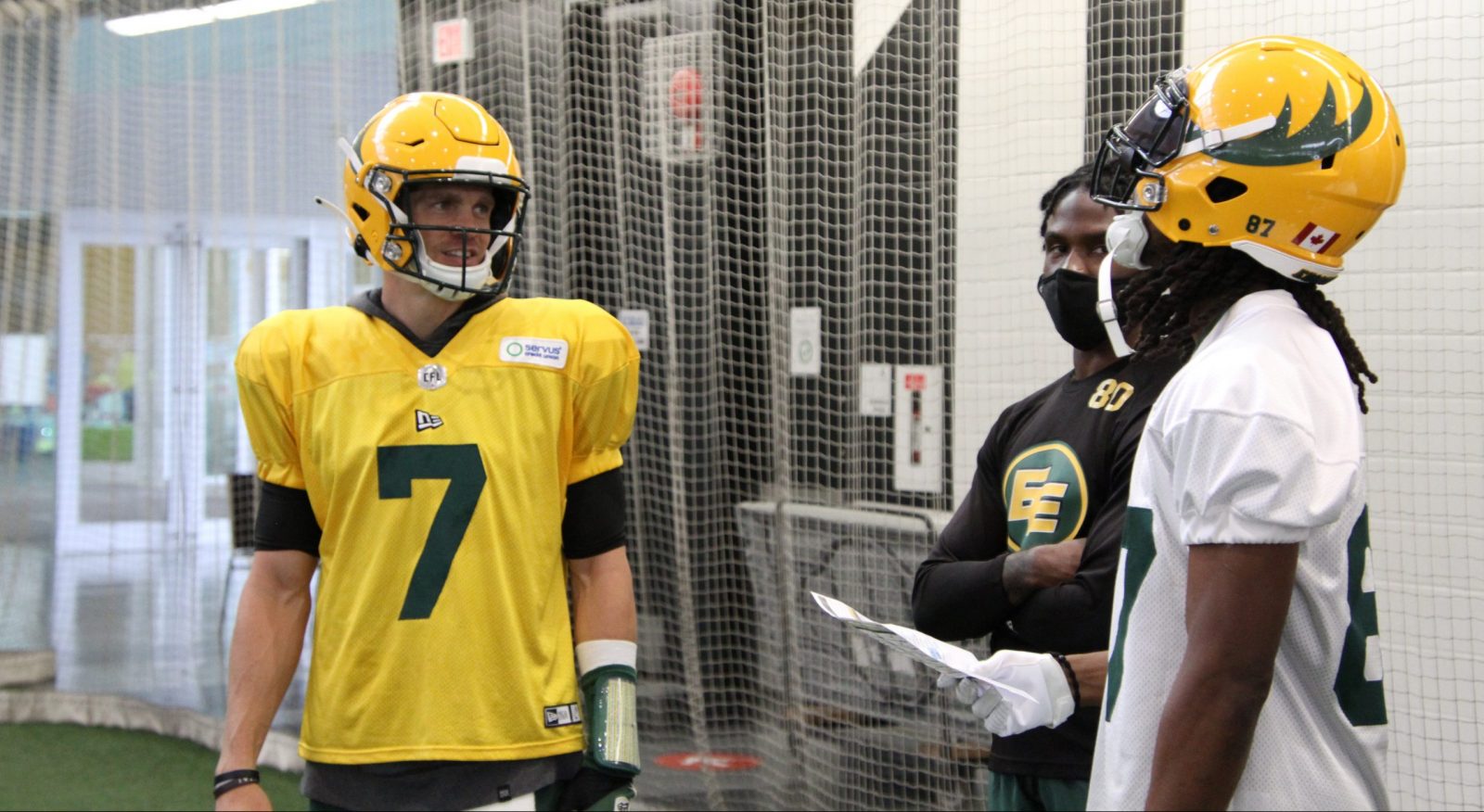 Smoke forced the Edmonton Elks inside yet again on Monday, as the second week of  training camp opened up.

Prior to practicing inside at the Commonwealth Community Recreation Centre fieldhouse the Elks released seven players, as the club trimmed its roster ahead of Monday night’s CFL deadline to get down to 75 players  (non-counters excluded).

In addition to releasing seven players Monday morning, there were two new (old) faces back with the Green and Gold, as offensive lineman Thaddeus Coleman and receiver Derel Walker joined the team after completing COVID-19 quarantines.

Star wide receiver Derel Walker is back in the Green and Gold!

It was hard not to get excited when No. 87 walked onto the turf Monday morning.

Walker was back where he belonged, as the three-time 1,000-yard receiver joined the squad after completing a week-long hotel quarantine in Edmonton.

“Who’s No. 87?” head coach Jaime Elizondo said with a laugh when asked about Walker’s first day. “First of all, it starts with who he is as a person. Great personality.”

“Phenomenal player, really good person and he’s been really in tune and asking a lot of questions.

Walker’s impressive resume, which includes a 2015 Grey Cup title with the Green and Gold, anchors a deep receiving corps that has the makings for a stellar 2021 season.

“Just looking at the roster on paper, man, it’s insane,” Walker said of his fellow receivers. “When I get around the guys it just makes it set all in. We’ve got a great group of guys here.”

“When you really look at our receiving corps, we’ve got a great group of guys who have played quite a while in this league and made a pretty good name for themselves.”

“I’m just looking forward to seeing how we put it all together and see how we play off of each other and see what we can accomplish as a team, as a receiving corps.”

Speaking of reunions, Coleman is also back for another stint with the Green and Gold on the offensive line.

The Mississippi Valley State product, who’s lived in Edmonton during the offseason since 2014, got the call from general manager Brock Sunderland earlier this month and was excited to rejoin the fold.

“Brock has seen me upstairs in the weight room. He’s seen me around the gym and stuff like that, so I’m always upstairs,” Coleman said of his training routine at the Commonwealth Recreation Centre.

“After everything that went down with all the tackles, I was probably an easy call. I’m like right up the street basically.”

Coleman has kept busy during the CFL’s extended offseason, continuing to work as a personal trainer, while also launching his own food truck business.

Along with his wife, Coleman has started Live Bowl’d, which focuses on healthy eating and leans heavily on the acai berry in its recipes. The business helped keep Coleman busy during quarantine, as he balanced virtual team meetings with planning for the truck’s appearance at Taste of Edmonton (July 22-August 1).

“Things were starting to open back up and we were like ‘this would be a great way to make some good money, bring in something new to Edmonton,'” Coleman explained.

“A lot of people see it in California, or Hawaii,” Coleman explained of the acai berry in cooking. “We knew Edmonton didn’t have it, so we brought it here and it’s been good.”