Friday at Edmonton Elks camp was about taking the last step towards Saturday’s scrimmage (11:30 a.m.), which will be a particularly important measuring stick for players.

With no preseason action ahead of the season opener on August 7th against Ottawa, Saturday could be make or break for a host of Elks. 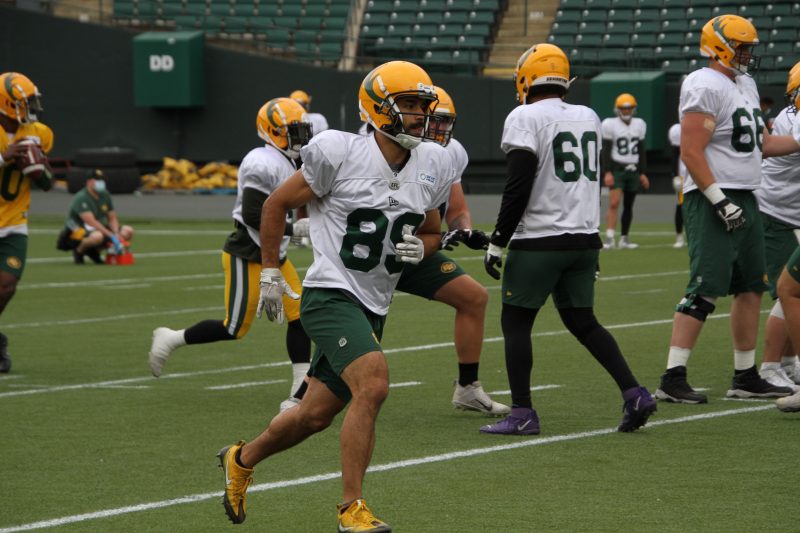 Professional football is a business.

And while that reality can sometimes weigh on players, count Elks receiver Diego Viamontes as someone who’s working to find the joy in every day.

“I play every day like it’s the last day I’m putting on a helmet and getting on the field,” Viamontes said. “Last night when I went to bed I felt tired, I was just finished studying and what kept me up was thinking ‘tomorrow I’ll go and play with my friends.’ That’s my mentality right now.”

With Saturday’s scrimmage very much on the minds of players and coaches alike, Viamontes wants to carry that mentality of embracing the opportunity to be with his teammates and show his best into the team’s last action on the field before the team trims its roster heading into Week 2 of camp.

“About the scrimmage tomorrow, that’s my mentality – I will go out and play with my friends and have fun and make some great plays, like when I was 12 years old.”

To hear more from Viamontes, whose wife and business partners are currently working hard to grow his café ch. cafeteria, click here.

FIRST TIME AT THE HELM

Through nearly a week of camp, things have been running smoothly for rookie head coach Jaime Elizondo. And with nearly 100 players on the field, many of them new to Edmonton, it’s been easy to forget that this is Elizondo’s first CFL training camp at the helm.

Elizondo credits his coaching staff for having things go largely to plan, as his staff continues to gel.

“I’ve worked with a lot of the guys individually, and obviously in a different capacity, so it’s (about) refining our process.”

For Elizondo, being sure he balances his many hats (or visors in this case) has also been on his mind.

“I’m comfortable in the role, it’s just a matter of saying ‘hey, balancing the decision making and making sure that I do a good job of taking off my offensive coordinator hat and putting on my head coach hat and not tilting one way or another for those guys.'”

Thank you to the OG @calvinmccarty31 for all you have done for the city and the organization while wearing Green and Gold. We wish you the best in your retirement. #OnceAlways #BONE pic.twitter.com/khUGon9rI1

When Calvin McCarty retired earlier this year it left a noticeable hole in the Elks’ fullback depth chart.

The 13-year pro’s impact, however, hasn’t left the organization.

Tanner Green is among the fullbacks in camp – along with Peter Cender and James Tuck – who are keeping McCarty’s approach in mind as they move into the 2021 season. 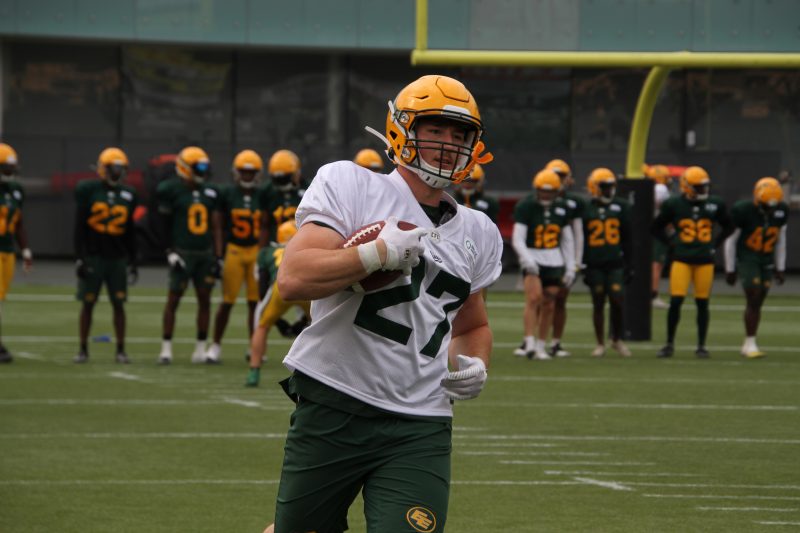 “It’s definitely different,” Green said of McCarty not being in camp. “He had so much character and energy. It’s like something’s missing, kind of.”

“Us in the fullback group that knew him well are trying to keep how he liked to do things and kind of how his character affected our group alive in any little way we can.”