The Edmonton Elks returned to The Brick Field at Commonwealth Stadium on Thursday, as the squad builds towards the first scrimmage of training camp this coming Saturday.

On a smoky day in Edmonton, there was fire in the trenches at Elks camp.

As training camp marches on, tempers flared in the trenches on Day 5 of camp.

While emotion is a key ingredient to any success on the gridiron, head coach Jaime Elizondo delivered a clear message post practice about the importance of walking to the edge but not past it.

“It’s hot out there, there’s some smoke in the air, so tempers started to fly a little bit and that’s part of the game,” said Elizondo.

“We want to take it right to the edge, but you’ve got to have emotional control in a game, because based on what happened today we would’ve had four players thrown out. Philosophically we want to put the team first in everything that we do and we didn’t do a good job of that today in those scenarios.”

“That’s part of the game, it’s physical, tempers flare, but we’ve got to have some emotional awareness to us and let our play do the talking. Hopefully we can take the next step and grow in that area.” 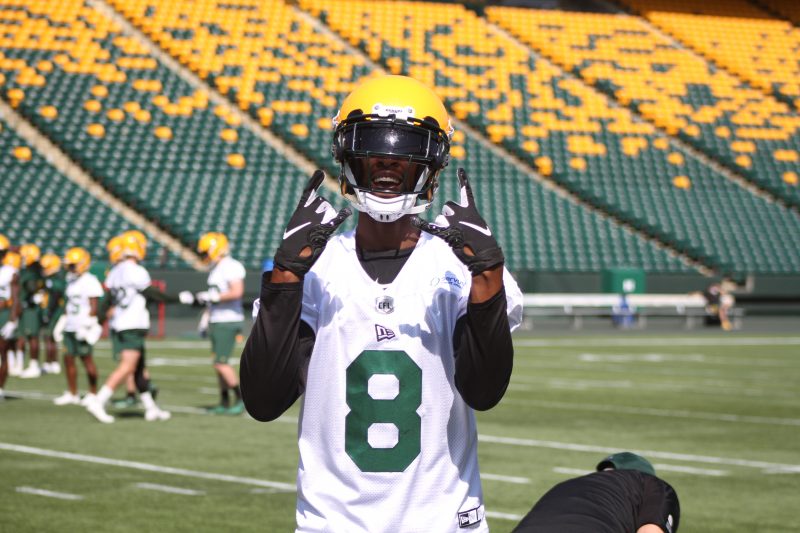 Elks receiver Kenny Stafford was clear when asked why he’s back in Edmonton for another ride with the Green and Gold – Trevor Harris.

The pair of Ohio natives – Kenny from Columbus and Harris from Waldo – trained together this off-season. It was back in the Buckeye state where Stafford impressed Harris, who went to bat for the veteran CFL receiver.

“Honestly, Trevor Harris is the reason that I’m here. We were both in Ohio, we were throwing with each other in the offseason and he was like ‘man, you look faster than you were last year. You look really good. You look like you can help us out. I’m gonna keep calling Brock,'” Stafford explained.

Harris might have a career as an agent down the road, because his conversations yielded a contract offer for Stafford, who’s back in Edmonton and enjoying the surroundings where he became a Grey Cup champion in 2015.

NEW SIDE OF THE BATTLE 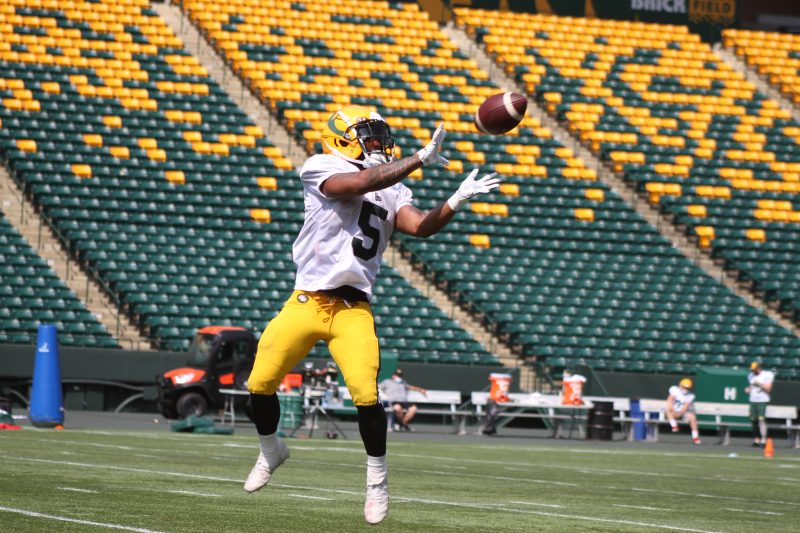 Running back and return man Terry Williams is settling into a new side of the Battle of Alberta.

The product of Kutztown University spent three seasons down the QEII with the Calgary Stampeders, making a name for himself in the return game, including his 96-yard punt return touchdown in Grey Cup 106 against Ottawa.

“The last time I was in this locker room we won a championship, so it’s different now,” Williams, who inked with Edmonton prior to the 2020 season, pointed out. “I’m glad to be here. It’s a great organization, great facilities, great coaches and just a great atmosphere.”

Williams and his four career regular season return TDs (three via punt in 2018 and one on kickoff in 2019) are now residing on the right side of what should be a fun Labour Day series with the Stamps, especially the Labour Day rematch Sept. 11 at The Brick Field at Commonwealth Stadium.

ARMANTI LIKES WHAT HE SEES

Like Williams, Armanti Edwards inked with the Elks before 2020 and is now settling in after an extended period of anticipation.

A 1,000-yard receiver from 2019 with the Toronto Argonauts, Edwards is starting to build a connection with Harris on and off the field.

“It’s the same as when I used to watch him on film and in games. He’s a great competitor, he’s decisive with the ball, he knows where to go with it and also just getting to know him personally, he’s a funny guy,” Edwards explained of what he’s seen in Harris.

“He’s a nice guy to hang around with in the locker room and he’s always upbeat. I think it’s going to be a fun year all around.”