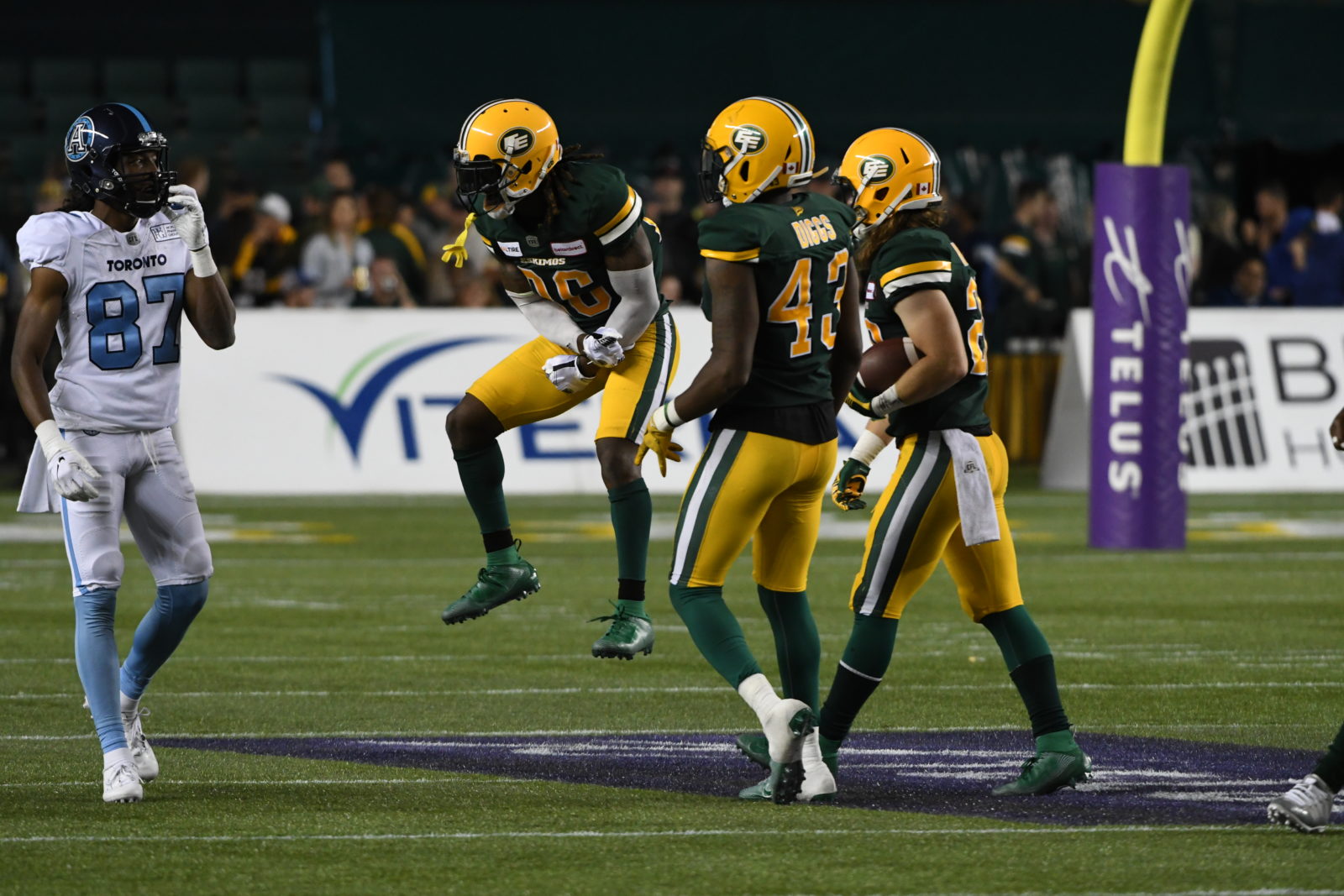 A shutout is a rare feat in football, even when playing against a struggling team like the winless Toronto Argonauts, now 0-6.

“I don’t think I’ve ever had (a shutout),” said third-year national safety Jordan Hoover, who caught his first career CFL interception in the third quarter. “Not in college, not in the pros, not that I can remember in high school. This is probably the first time.”

But Thursday’s 26-0 victory in front of the season’s biggest crowd of 30,368 at The Brick Field at Commonwealth Stadium wasn’t just about the Eskimos defence.

Eskimos Head Coach Jason Maas gave credit to the entire organization for the Green-and-Gold’s first shutout in five years (and only the Eskimos’ second goose egg in 16 CFL seasons).

“It was a complete team effort, a complete organizational effort,” Maas said after the Eskimos delivered a strong performance off a short week with only four days between games and one full practice on Tuesday.

“Everything we’ve done in the off-season to get our rest and recovery rooms going with Kyle (Thorne, Director of Human Performance) and our strength and conditioning program to get our guys ready to play this week was huge,” Maas continued. “Nate (Hay, Head Athletic Therapist), Dwayne (Mandrusiak, Equipment Manager), the whole staff. It was great. Our players did a great of taking advantage of it. Our coaches did a great job of getting plans together on short notice, with not a lot of prep (preparation) time, dog-tired all week.

“But to go out and play a performance like that – after a loss, especially – in your home stadium and get a shutout, which hasn’t been done for a few years, big statement and I’m very proud of the guys.”

The Eskimos, who didn’t score a touchdown in two of their previous three games (both losses), wasted three great scoring opportunities on their first four possessions.

Second-year running back Shaq Cooper, who was filling in for injured starter C.J. Gable, lost a fumble at the Toronto one-yard line to end the first series.

“That’s been our Achilles (heel) on offence all year – goal-line situations getting stopped with turnovers or just getting stopped,” Maas said. “But he did bounce back and had some tremendous runs, tremendous plays throughout the game that helped us win.”

Wide receiver Kenny Stafford also had a touchdown catch nullified by an Edmonton penalty for the second game in a row on the second series, but quarterback Trevor Harris was still able to plunge into the end zone on a one-yard QB sneak for his fourth touchdown of the season to cap off the drive as the Esks jumped out to an early 7-0 lead.

“They take a touchdown away from us every week, so we’ve got to make sure we capitalize on those because, obviously, a shutout is a very rare deal and we’ve got to be able to help our defence out and stretch the lead and get some more points on the board,” Harris said.

Stafford also dropped a likely touchdown pass at the Toronto one-yard line early in the second quarter, setting up Sean Whyte for his first of four field goals from the 21-yard line and a 10-0 lead. Whyte later added a 47-yard field goal to increase the lead to 13-0.

“I felt great after I made the 47-yarder,” said Whyte, who missed his final two kicks in last week’s game against the Montreal Alouettes. “I knew I was in a good rhythm at that point, and I was going to have a good day.”

Meanwhile, the Eskimos defence kept the Argos pinned in their own zone until 75 seconds remained in the first half. Toronto got all the way down to the Edmonton 19 before quarterback McLeod Bethel-Thompson was sacked on back-to-back plays. First, Eskimos defensive end Nick Usher got to Bethel-Thompson for a five-yard loss. Then fellow defensive lineman Kendal Vickers forced a fumble that Usher recovered while Vickers was sacking the quarterback.

In the second half, the Eskimos punted on five of their eight possessions but scored another 13 points on the other three drives – a four-yard touchdown run by Cooper in the third quarter and field goals of 37 and 39 yards by Whyte during the final 15 minutes.

“In the second half, it was just about moving the chains, staying on the field, doing the best we could to help (the defence) protect the lead and not do anything to put them in a bad spot,” said Harris (27 of 39 passing for 298 yards). “In that way, we did a good job, but we also got to put our foot on the gas as well.”

Whyte, who has made 77 of 83 of career field goal attempts (92.8%) at The Brick Field, has been kept busy this year. The league-leading scorer with 77 points, he has kicked at least three field goals in each of the last five games and as many as seven in one contest.

“Last year, it felt like I had one field goal a game and it was usually a long kick,” he said. “I feel like I’m going to get a lot of opportunities this year just the way our offence is. It’s more of that picking the defence apart and moving downfield. So we’re going to score a lot more points.”

If the Eskimos defence has its way, it won’t be giving up many points at any time.

“Our defence is trying to pitch shutouts,” said nose tackle Almondo Sewell, who couldn’t recall Edmonton’s 24-0 shutout against the Saskatchewan Roughriders in 2014. “We preach that every single week.”

Sewell pointed out that defensive line coach Demetrious Maxie says if the defence can shut down the run, the D-linemen can “be as much of sack hogs as you all want to be.”

“We shut the run down, and it got to be a track meet after that,” Sewell said.

“We were so excited to play back at home,” Johnson said about the Eskimos having their first home game in 34 days. “We had a short week. We knew it was going to be tough playing against an opponent who hasn’t had a win all season, so we just said, ‘Fly around, just attack them, play ball and play within the defence and everything will be alright.’ ”

Johnson, who also had five defensive tackles and a third knockdown nullified by a penalty, said the Eskimos weren’t a tired team against the Argos because they mostly had mental practices and only one physical practice this week.

“All I can say is Coach (Phillip) Lolley (the defensive coordinator), had a great game plan. He called some great plays. Our D-line just played tremendously. They had so many sacks. Our linebackers were hitting them, and the DBs were being ball hawks. We had three or four picks tonight. Man, it was so fun.”

Offensively, Cooper had 22 carries for 128 yards in his first game of the season. He also had a 102-yard rushing game in his CFL debut last year.

“It was fun being back out there again,” he said. “I didn’t play in the pre-season, so it’s been a minute for me.”

Cooper, 26, pulled his hamstring two days before the first pre-season game on May 26 and wasn’t fully recovered until two weeks ago.

“I got a chance to get out there and show what I could do,” he added. “I appreciate the O-line (for creating running lanes in the defence).”

While Cooper was disappointed in himself for losing the early fumble, he bounced back with some big runs of 11, 17, 16, 11, 10 and 26 yards while also catching five passes for 48 yards.

“I slowed the game down with my eyes and played ball,” he said.

One of Cooper’s more interesting plays was when he ran about 90 yards after catching a short pass on the right side of the field and then reversing his direction and racing all the way over to the left side before being pushed out of bounds for a 12-yard gain and a first down.

“That was a little college football right there,” Cooper said. “I was just having fun out there. I was trying to be a play-maker and make something happen.”