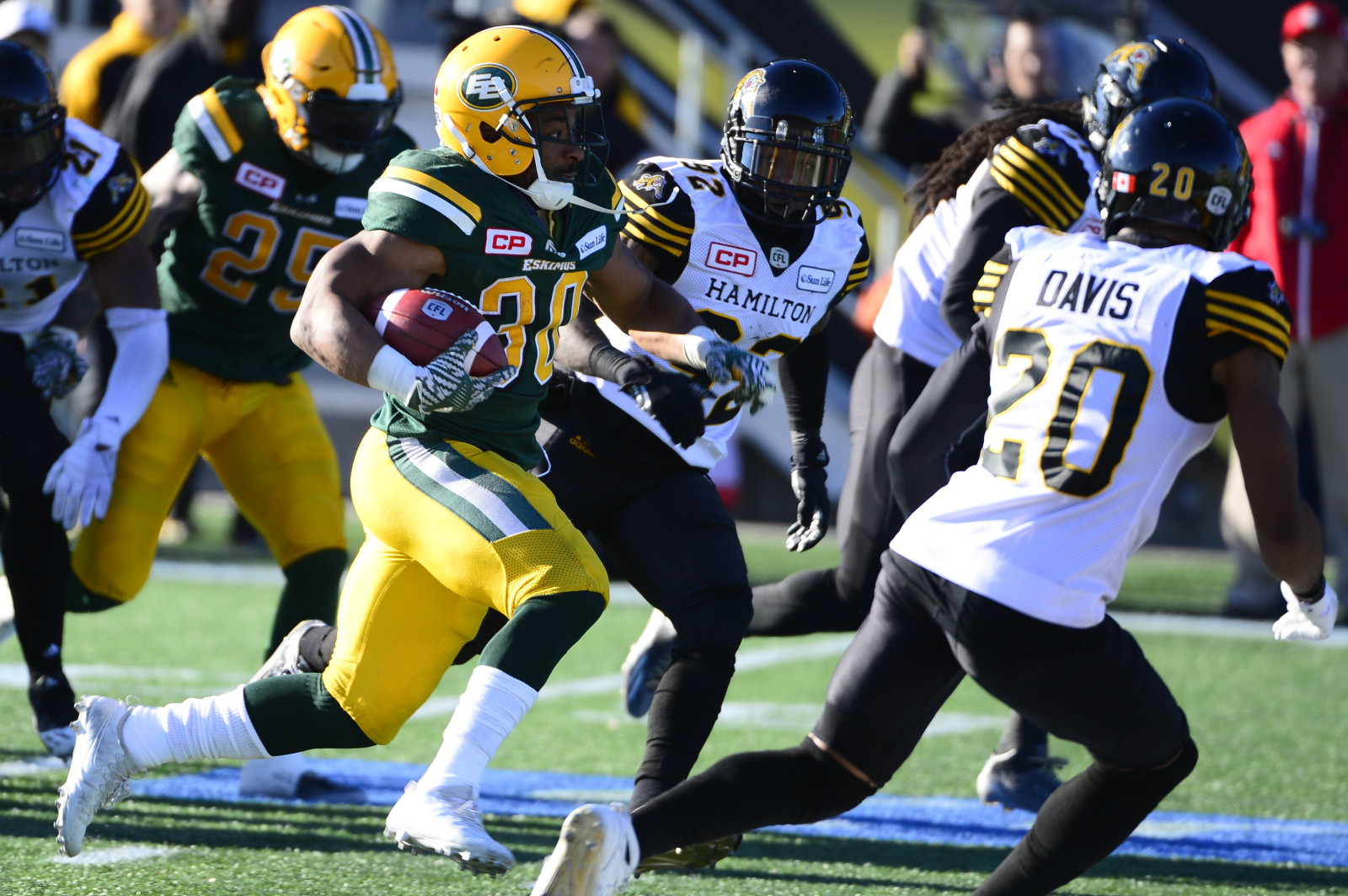 The Edmonton Eskimos won a thrilling Eastern Semi-Final when Sean Whyte booted a nine-yard field goal with seven seconds left to give the Eskimos a heart pounding 24-21 win over the Hamilton Tiger-Cats.

“My only worry there was to get the ball up in a hurry,” Whyte told 630 CHED. “They’ve got some big dudes in front of me.”

” I wouldn’t say I’m the hero of the game. I’d give that to Johnny White

“I played for Montreal and we always lost here. This is the first playoff game I’ve won here.”

Edmonton’s winning effort was set up when rookie defensive back Kenny Ladler intercepted a Zach Collaros pass and the Eskimos took over on Hamilton’s 20-yard line with 1:20 left.

“We bend but we don’t break,” said Ladler. “After I caught the interception, I was just thinking ‘help me get to the end zone,’  Everybody was excited and felt the game was in our hands at that point with the interception. I’m just glad we were able to get this win.”

With backup QB James Franklin at the helm in the fourth quarter, John White completed a monster game, lugging the ball to the two yard line, where the Eskimos ran down the clock until the winning field goal.

White went into his self-described Wolf Mode for the Eskimos, scoring touchdown runs of 11 and 19 yards as the Eskimos took a 15-3 lead on their first two possessions. White finished the game with 160 yards on 20 carries.

“Man, that was a fun game,” said White. “When it comes down to that point, you have to be professional and finish. Every game, I feel like I should get it going. I just go out there with my head on fire. We still left some points out there and made it a closer game than it needed to be, but it’s good to come out victorious.”

“I was jawing at the sideline, ‘bring Whitey in right now and let’s get it over with.’ When James came in, we knew we couldn’t panic. If you seen him last game and the way he performed, he’s one of our brothers. When he’s coming in, we know he’s going to be cool, calm and collected.”

They needed White’s effort as Hamilton limited the Eskimos top receiving duo of Adarius Bowman and Derel Walker to a total of six catches for 84 yards.

Ladler’s effort was symbolic of a tough defensive effort for the Eskimos, who held tough after Hamilton mounted a ferocious fourth-quarter comeback to tie the game at 21-21.

On Hamilton’s game-opting possession, the D had set the tone early with a third-down turnover stuff.

“It’s never easy winning a playoff game,” said Eskimos head coach Jason Maas. “Any time you’re going into the wind after losing the coin toss, you need to get turnovers. To get one early like that on the first drive was huge. Huge momentum going for us and we go right down and score, taking a lot of time off on that drive. It was a perfect storm, really, early in the game for us. It was awesome by our defence, for sure.”

Edmonton now travels to Ottawa where they will face the RedBlacks in the Eastern Final next Sunday. Ottawa has beaten Edmonton twice this regular-season, but the Eskimos have improved greatly since their last meeting in August.

“It’s very similar to last year where we played them early in the season,” said Maas. “We were a much better team at the end of the year. I know they’re a resilient team and they’re going to be as healthy as they’ve been all year. They have a Hall of Fame quarterback (Henry Burris) playing for them and a lot of dangerous weapons of offence. Defensively, they’re a lot similar to Hamilton. There’s going to be a lot of challenges for us.”