The Edmonton Eskimo Football Club is saddened by the passing of former player Garry Lefebvre.

Lefebvre played with the Edmonton Wildcats Junior Football Club for three seasons before joining his hometown Edmonton Eskimos, where he spent nine seasons from 1966 to 1969 and 1972 to 1976. In 1969, he was traded to Montreal where he would play until 1971.

As a receiver, he amassed 2,857 career yards on 153 catches with 21 touchdowns in 136 games. Also a punter, Lefebvre recorded 22,983 yards on 580 punts. Ever versatile, he intercepted seven passes at defensive back, returning two for touchdowns. 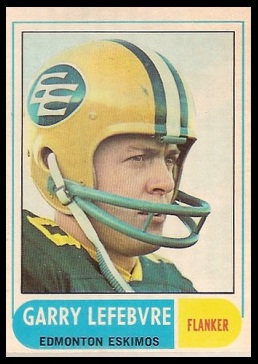 A two-time Grey Cup champion, he won in 1970 with the Montreal Alouettes and in 1975 when he returned to the Green and Gold.

Following his playing career, Lefebvre became one of the founders of Athletes in Action Canada. He also began and led the Eskimos pre-game chapel program for five seasons.

The Edmonton Eskimos extend our deepest condolences to his family, friends and fellow Eskimos alumni members.