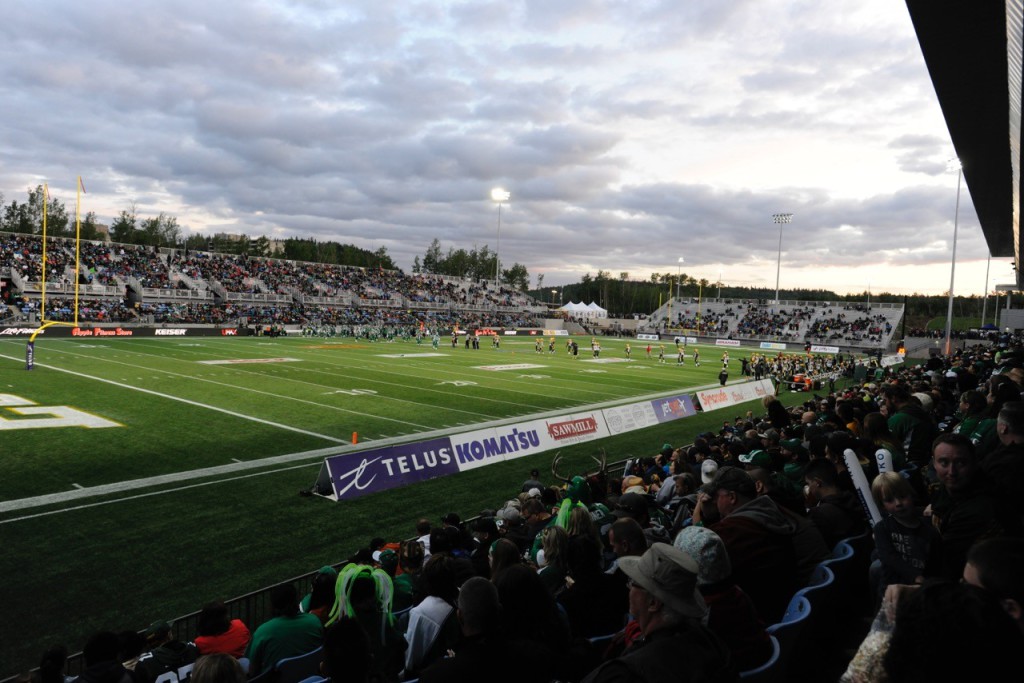 History was made on June 13 when the Canadian Football League arrived in Fort McMurray for the first time.

The Edmonton Eskimo Football Club opened its 66th season at “home” with the history-making Northern Kickoff presented by Shell – the most Northern game in the 103-year history of the CFL. SMS Equipment Stadium at Shell Place hosted the pre-season tilt against the Saskatchewan Roughriders in front of thousands of fans and numerous dignitaries, including CFL Commissioner Jeffrey L. Orridge.

“What an incredible experience for our community,” said Michael Cachia, Chair of the Board of Directors of the Regional Recreation Corporation of Wood Buffalo (RRC), operators of the host field. “For more than two years the Northern Kickoff Organizing Committee, The Edmonton Eskimo Football Club, the ONE Team from the RRC, and our many key partners, including presenting partner Shell, have been preparing to welcome the CFL to Fort McMurray for the first time, and we are delighted that this event brought our entire region and community together to celebrate.”

President and CEO of The Edmonton Eskimo Football Club Len Rhodes added: “Two years ago we had a vision of creating the most Northern game in CFL history. Now, the game is forever etched in the walls of football history. We showcased professional talent in a state-of-the-art stadium to a national TSN audience throughout Canada. We are so proud.”

The Northern Kickoff presented by Shell was delivered through an organizing committee consisting of dozens of community members, industry and business representatives and employees of the RRC.

“It truly takes a community to pull off a project and an event of this magnitude,” said Peter Zebedee, General Manager, Shell Albian Sands. “Shell Place is the result of the hard work and collaboration by the Regional Recreation Corporation, the Regional Municipality of Wood Buffalo, community organizations, the architects, contractors and workers – everyone – who turned Shell Place from idea to reality. As the title sponsor of Shell Place and the presenting sponsor of the Northern Kickoff, Shell, our employees and our joint venture partners are honoured to support the creation of a venue that adds to our quality of life and changes the face of our community.”

The Eskimos also thank all of their own team sponsors.

“We are thrilled to be a part of CFL history,” said Mayor Melissa Blake, Northern Kickoff Chair. “This exciting event not only showcases our strong fan base and world-class facilities, but also our big community spirit.”

The Kick Hunger Campaign, a partnership with the Wood Buffalo Food Bank, and proudly supported by the Building Trades of Alberta, allowed football fans to donate cash and non-perishable food to help those in need at a variety of events leading up to Northern Kickoff, including on game day.

“We have so many to thank, including all our partners and sponsors, The Edmonton Eskimo Football Club, the Canadian Football League, the Regional Municipality of Wood Buffalo, the Wood Buffalo Food Bank, the members of the organizing committee, our many volunteers and most especially the fans and community members who created a day that will always live in the history of Fort McMurray,” said Cachia.

The Eskimos return to Fort McMurray on Saturday June 27, this time as a visitor to the “home” team Toronto Argonauts in the regular-season opener when SMS Equipment Stadium at Shell Place hosts the first regular season CFL game ever played in Fort McMurray. Tickets for Northern Kickoff II on June 27 are now available at ONErec.ca.